Most jurors in Risperdal trials are likely sympathetic and at the same time shocked to discover how boys who developed female breasts have suffered. The public are likely reacting the same way after seeing a photo project online titled “Risperdal Boys”. 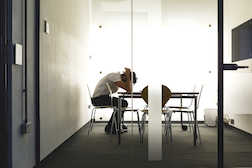 Photographer Richard Johnson has captured the pain and suffering and embarrassment of six young men (four others opted out before publication) who developed gynecomastia. Johnson explains on his website why these young men chose to go public. “They wanted the world to know what happened to them,” Johnson said. “Most of the young men in the project suffered alone; they’ve never met someone else with their condition.”

They are indeed brave men to step forward. One striking thing about the photographs is the background Johnson captured. For instance, Eddie from Oklahoma stands outside his run-down home. All six young men appear to fall into the ‘lower income’ category. And that comes as no surprise: Risperdal targeted patients on Medicaid, but it isn’t easy to get Medicaid to cover breast removal surgery.

Even if a family scrapes together enough money to pay for surgery, there are challenges and the outcome may not be satisfactory. Most boys who develop breasts also gain a lot of weight—up to 100 pounds a year. Doctors are reluctant to operate on a Risperdal patient until he loses weight, and the surgery is painful as well as costly. So much so that Michael from Cleveland, one of Johnson’s “Risperdal boys” had to undergo a “no frills” surgery with disappointing results. Another boy said his mother paid for the surgery but couldn’t afford general anesthesia, so he had breasts removed with a local.

More RISPERDAL News
“All agreed their struggle would be easier if they knew others were facing the same bullying and social isolation that they faced as a boy with breasts,” Johnson said. “There are potentially tens of thousands more guys out there that don’t know why they’ve developed breasts, and they don’t realize how many others? have similar stories.”

A few Risperdal victims have prevailed in their lawsuits and were awarded huge sums of money. Andrew Yount was awarded $70 million by a Philadelphia jury, for instance. But thousands of boys without the benefit of an experienced attorney haven’t received a dime, despite Johnson & Johnson (the Risperdal maker) being fined $1.2 billion in 2012 and a whopping $2.2 billion fine just one year later. And the mammoth drug company raked in $800 million in Risperdal sales last year alone.

Our hats off to photographer Richard Johnson and the six courageous men profiled in “Risperdal Boys”.