When Matt’s hairline started to recede he reached out for Propecia. “I was afraid of looking like my dad, but now my girlfriend says she’d rather have me bald than bad in the bedroom,” says Matt. 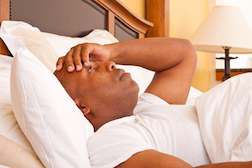 “I asked my doctor to put me on Propecia and he didn’t hesitate. It’s a psychological thing,” says 25-year-old Matt (not his real name). “I was getting pressured from all sides: from fellow students in law school, from customers in my dad’s restaurant where I sometimes work, and most of all my girlfriend.”

But Matt’s girlfriend now regrets nagging him about his hair thinning. “She’s a nurse practitioner and feels guilty about not researching Propecia before I started taking it,” Matt explains, “and I naively trusted my doctor without asking if it comes with any side effects. Of course I would never have taken this med had I known it would cause sexual dysfunction. I have always been in great shape, and never had any problems in bed. And I’ve always taken care of myself—perhaps overly so…”

Matt was too embarrassed to discuss in detail his sexual problems. But he admits that vanity can be harmful. Suffice to say, he welcomes this opportunity to warn men about Propecia, and not to mess with testosterone. (Finasteride works by blocking an enzyme (5-alpha reductase) that converts testosterone to DHT.)

Merck’s Propecia (originally called finasteride) was initially approved by the FDA for the treatment of enlarged prostate. In its clinical trials leading up to approval, Merck discovered that some patients were growing hair so it obtained FDA approval in 1997 for baldness treatment and called finasteride Propecia. Merck hit the jackpot, particularly because the benefits would stop if the medication is discontinued (both for prostate treatment and baldness). The American Journal of Clinical Dermatology (July 2014) reported that any therapeutic benefits of finasteride reverse within about 6-8 months after the drug is discontinued, with effectiveness only persisting as long as the drug is taken. Cha-ching.

More PROPECIA News
Matt stopped taking Propecia about this time last year. Given the time it takes for therapeutic benefits to reverse, the sexual dysfunction side effects should have disappeared by now. “Accepting baldness is something I have to conquer but more than that, I am concerned that my sexual performance hasn’t returned. I just hope I’m not one of those unfortunate men who have permanent sexual side effects,” he says.

According to Merck’s financial filing for the quarter ended March 2016, the drug manufacturer is facing 1,385 product liability lawsuits from Propecia consumers, all of whom allege persistent sexual side effects following cessation of treatment with finasteride.

“I am pissed off with Merck and the FDA for not doing enough research,” Matt adds. “ I fell for the Propecia infomercial and feel like an idiot for doing so. I ended up with a side effect so much worse than baldness.”