Sexual Dysfunction was Always There, but the Conversation Changed with Propecia

When finasteride (Proscar) was first approved by the US Food and Drug Administration (FDA) as a treatment for benign prostatic hyperplasia (enlarged prostate) in 1992, researchers found higher incidents of sexual dysfunction in study participants taking finasteride when compared against a control group taking a placebo. Two dosages were studied: 5mg, and 1mg. The study, as reported that year in the New England Journal of Medicine, found a higher incidence of impotence, ejaculatory disorders and decreased libido in both treatment groups. 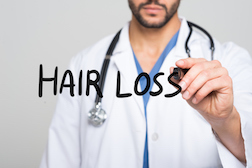 This was five years before the FDA approved Propecia (finasteride), at the 1mg dosage, for treatment of hair loss. Dr. Daniel Marchalik, a Washington-based urologist writing in The Washington Post in an op/Ed piece that also appeared in the Miami Herald (02/04/17), makes the observation that finasteride side effects pertaining to sexual dysfunction were known five years before Propecia (finasteride) was given the nod by the FDA.

Dr. Marchalik noted that Proscar side effects as they relate to sexual dysfunction had been consistently and systematically studied and the results had been published, although “the conversation remained far from the public sphere, in part because of the older age of patients taking Proscar for enlarged prostate,” Marchalik writes.

The conversation changed, however when finasteride 1mg, marketed under the name Propecia as a treatment for male pattern baldness, was approved in 1997 and made available to a new cohort of patients. The sudden increase in finasteride prescriptions for younger men battling early hair loss threw the specter of Propecia impotence into a larger cross section of the public conscience – and also threw Propecia sexual dysfunction into the headlines.

Marchalik references various studies, beginning in 1998 – the year after Propecia was introduced – that found a rate for Propecia sexual dysfunction that was about double for the finasteride group, when compared with the placebo group.

Marchalik also references a study published in 2012 in the Journal of Sexual Medicine that found 54 study participants under the age of 40 presented with ongoing Propecia sexual dysfunction three months after stopping Propecia. The men were reassessed at 14 months, with the vast majority – 96 percent – continuing to suffer from Propecia sexual dysfunction or Propecia impotence over a year after stopping use of finasteride.

In 2012 the FDA mandated a label change for Propecia and Proscar with regard to the potential for sexual dysfunction, including “libido disorders, ejaculation disorders, and orgasm disorders that continued after discontinuation of the drug.”

“For those of us in urology, finasteride will inevitably remain an important treatment tool for certain medical conditions,” Dr. Marchalik writes. “But because recent data suggests that finasteride-associated side effects may persist even after the medication is stopped, the key intervention must consist of both adequately counseling patients on the potential harms of these drugs and of carefully selecting the patients who are best candidates for receiving this medication in the first place.”

Dr. Brian Marchalik is a urologist at the MedStar Washington Hospital Center in Washington, DC and directs the Literature and Medicine Track at the Georgetown Medical School.