Plane Crash: When a Plane Drops from the Sky

A plane crash that took 10 lives in October probably could have been prevented if alleged known faults inherent with the plane had been addressed prior to the fateful flight.

Two lawsuits have been launched in recent weeks at the behest of the families of two skydivers killed in the October 7th airplane crash that left no survivors. A party of nine skydivers was returning from a sky diving event in Star, Idaho when the plane went down in rugged terrain west of Yakima, in the Cascade Mountains. The pilot was also killed, and there were no survivors in the plane crash.

At issue is an aircraft that is allegedly at the center of controversy, not to mention pre-existing litigation. The Cessna 208B Grand Caravan is just that: a people mover of the skies and similar to a cargo airship. Alleged problems with the plane's stall warning system and pneumatic de-icing system contributed to the crash, according to lawsuits filed on behalf of skydiver Bryan Jones of Redmond, and Andrew Smith of Lake Stevens, and their families. Both men were killed in the airplane crash. Both lawsuits were filed in US District Court Seattle. 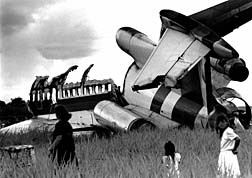 According to the lead lawyer in the Jones lawsuit, the Cessna Grand Caravan could be likened to an "ice magnet" and the aircraft should never have been certified for flight in icy conditions. Seattle lawyer Dean Brett goes further, accusing Cessna of faking data in a bid to see the plane certified for cold weather flight.

For its part the manufacturer, while refusing to comment in the face of pending litigation, did indicate through a spokesperson that the aircraft was approved for flight into known icing conditions by the Federal Aviation Administration (FAA) provided the aircraft was operated according to the approved pilot handbook.

The stalemate will be debated in the courts, and several times over as it turns out, given the number of similar lawsuits naming Cessna Co. and the 208B following similar crashes of the aircraft in Russia, Canada and throughout the US. These latest lawsuits were represent other lawsuits involving the Cessna aircraft, and a de-icing system manufactured by Goodrich Corp.

The skydivers were from Skydive Snohomish and were experienced skydivers. Ironically, their demise was not due to skydiving, but rather the simple act of commuting.

While plane crashes can result in loss of life, the risk can be perpetuated when that plane crashes into populated areas. Akin to a motor vehicle that is not guaranteed to break down where it is convenient to pull over, a problem in the air does not always choose a remote area to emerge. Images of small planes crashing into apartment building balconies, or coming down in the midst of a busy soccer pitch are all too common.

More News
And this past Wednesday fate would bring a small plane down on top of The Congregation Children of Israel Synagogue in Augusta, Georgia. While young at 19, the pilot was licensed and a valued employee with Phoenix Air of Cartersville, GA. Ron Baker was piloting a single-engine Piper Arrow from Charleston, South Carolina to Cartersville GA when, according to reports, the pilot reported a problem with the engine.

There were 10 people in the Synagogue when the plane crashed into the building, killing the promising young pilot instantly. Luckily the worshippers were opposite the portion of the building that took the direct hit from the airplane crash.

Reports suggest the plane involved was an older model Piper Arrow. People at the scene maintain it was a miracle more people were not hurt, or killed.