Five people died in a plane crash in New Mexico yesterday, according to officials. In addition to the five fatalities, two people were injured in the airplane crash. The names of the plane crash victims have not been released. 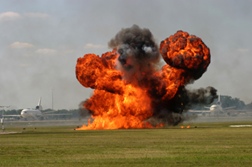 According to a 6/17/10 report by the Associated Press, a twin-engine plane crashed at Sierra Blanca Regional Airport in south-central New Mexico at approximately 10 am local time. The plane involved was a Cessna 310, reportedly owned by Rod Aviation out of Texas.

More AIRPLANE CRASH News
Authorities said the plane's passengers appeared to be related and the two who survived the crash were teenagers. The two survivors were airlifted to a local hospital in critical condition. Seven people are known to have been on the plane when it crashed; however, the plane was substantially damaged and it is not known if more passengers were aboard.

Both the Federal Aviation Administration (FAA) and the National Transportation Safety Board (NTSB) are investigating the crash, which also caused a fire at the end of the runway. According to reports, the plane overshot the runway during landing.

Meanwhile, a single-engine airplane crash a near the Rochester airport killed three people. According to officials, the pilot radioed air traffic controllers to say his engine failed. The plane crashed into a wooded area approximately 100 yards from a home. The pilot was trying to make an emergency landing at the nearby airport.