An almost certain airplane accident was averted on January 15, 2009, thanks to the courage and professionalism of two heroes in the cockpit of US Airways Flight 1549. One man in particular, Captain Chesley "Sully" Sullenberger, demonstrated a calm leadership that saved 155 passengers and crew from near disaster when the Airbus A320 commercial jetliner plunged into the Hudson River. 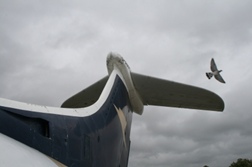 Today the National Transportation Safety Board (NTSB) meets to consider the lessons learned from that fateful day and how to prevent such an event from recurring and further endangering passengers and crew.

It's a troubling issue, according to an Associated Press (AP) report released yesterday. It is often said that commercial air travel is far safer than driving on the nation's roads (especially in view of cell phones, texting and GPS systems that distract drivers), but bird strikes have become a troubling problem.

The fate of US Airways Flight 1549 was sealed shortly after taking off from LaGuardia Airport in New York, when the plane flew into a flock of migrating Canada geese. The birds were sucked into both engines, completely knocking out their power. Without engines, Sullenberger had to make split-second decisions as to how best to land the doomed plane without loss of life.

It will go down in history that he, along with First Officer Jeffrey Skiles and the rest of his crew, made the right decisions. History will also show the havoc a bird the size of a Canada goose can wreak on a commercial airplane.

"They've got to deal with the certification standards for these engines based on the size of these birds," said former NTSB board member Kitty Higgins.

More AIRPLANE CRASH News
Higgins represented the NTSB in New York in the early stages of its investigation into the accident, and said the board considered recommending to the Federal Aviation Administration (FAA) last summer that aircraft engines be required to withstand the impact of larger birds. It was later decided to defer any recommendations until after the investigation into the crash of Flight 1549 was complete.

The NTSB is also looking into the damage suffered by the Airbus A320 in the water landing. A rupture towards the rear of the plane that sent water gushing into the passenger cabin also prevented the deployment of rear escape slides. While water landings are unusual, the NTSB is considering the possibility of recommending simulator training for pilots involving water landings in an effort to minimize damage, injury and loss of life when a plane has to be ditched in the water.