An airplane crash in Montana on Sunday, March 22, has taken the lives of all 17 people on board. The plane was on its approach to a Montana airfield when it nose-dived and crashed into a field next a cemetery. According to reports, the plane was carrying a party of children on a school skiing holiday. 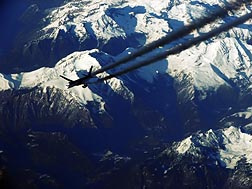 The plane crash involved a Pilatus PC-12 single-engine turboprop, built in 2001. The plane had left Oroville, California and was destined for Bozeman, Montana. However, partway through the flight, the pilot cancelled the flight plan and headed for Butte. It crashed approximately 500 feet short of the runway. So far, there have been no indications that the pilot declared an emergency onboard the plane.

Although no information has officially been released regarding the victims, reports indicate that there may have been approximately a dozen children, aged 6 to 10, heading to Montana for a skiing holiday. Witnesses said the plane was seen making sharp turns before it went into the nosedive. They reported seeing plane parts and luggage strewn around the area.

Investigators are headed to the crash scene to begin analyzing the wreckage. The plane was registered to Eagle Cap Leasing in Enterprise Oregon.