The five smiling faces in the photograph of the happy family drive home the tragedy that is the Montana plane crash, during which 14 people lost their lives when a single-engine turboprop crashed into a cemetery in Butte, Montana Sunday. 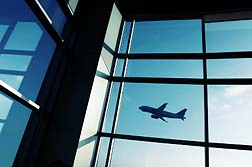 In the headline, 14 is a number. It isn't until you see the faces does one realize that fourteen lives were snuffed out in an instant. And somewhere in California, a house that once housed a loving family, sits empty today.

So far, investigators tasked with unraveling the Montana plane crash have not officially released the identities of those on board. However, according to CNN the grieving relatives of the victims have identified the doomed passengers.

In the case of Dr. Erin Jacobson, the hospital in California where the ophthalmologist practiced released a statement.

"The St. Helena Hospital family is filled with such deep sadness over the deaths of Dr. Erin Jacobson, his wife Amy, and their three children, Taylor, Ava and Jude," the hospital said in a written statement, adding, "Our thoughts and prayers are with the families and friends of each victim of this terrible tragedy."

The Jacobson children were 4, 3 and 2. To see their picture on the CNN web site is heartbreaking.

There's more. Another victim on the doomed plane, according to grieving relatives, was the sister of Amy Jacobson. Dr. Vanessa Pullen, a physician was aboard the flight with her dentist husband Michael Pullen, together with their children Sydney, 9 and Christopher, age 7.

The third family, according to CNN, was that of Dr. Brent Ching of Chico, California. The dentist, according to his office, was accompanied by his wife Kristen and children Hailey, 5, and Caleb, age 3. CNN reported that Adrian Cotton, whose wife is a sister of Vanessa Pullen and Amy Jacobson, was acting as a spokesperson for the families.

The only individual who was officially identified was the pilot. Bud Summerfield, 65, was described as an experienced pilot with more than 2000 hours flying time in the type of aircraft that went down Sunday.

Investigators are quick to point out that concluding what actually caused the plane crash would be a long and arduous task, given the fact that the Pilatus-12 aircraft, manufactured in Sweden in 2001, contained no black boxes for voice or data. Only commercial aircraft are required to carry such equipment. And while the plane was equipped with various pieces of avionic equipment that could bear analyzing, they are not built to withstand the type of air disaster that shattered the plane on impact.

Also, there was no radar or radio contact in the immediate few minutes before the plane went down. The last communication was with the Salt Lake City center when the plane was about 12 miles from Butte, Montana. Officials say there was no hint from the pilot that he was having difficulty, although Summerfield's decision to divert to a closer airfield has fuelled speculation.

"We don't know the reason for the requested change to the flight plan," said Doug Church, a spokesperson for the National Air Traffic Controller's Association. "We don't know (if) weather was a factor in Bozeman. There was no apparent reason given for the change in flight plan from Bozeman to Butte."

Investigators are quick to underline the folly of jumping to any conclusions. However there are two factors that bear scrutiny, and will likely serve as the leading pathways as the investigation unfolds.

One is weight. While there are various reports on just how many seats the Pilatus-12 carried, according to Mark Rosenker—acting chairman of the National Transportation Safety Board (NTSB)—the plane was equipped with 10 seats, including 2 in the cockpit. There were 14 passengers on board the plane, comprised of 7 adults and 7 children. While many of the children were small and it is common for young children to sit on the laps of adults, it is unclear of this practice violates aviation rules pertaining to the number of seats vs. number of passengers.

But there's another potential factor: icing. According to reports, while the weather in Butte was said to have not played a factor in the crash, it has been suggested that the plane may have encountered icing conditions when, on approach to Bert Mooney Airport at Butte, the aircraft flew through a layer of air at about 1,500 feet where temperatures were below freezing. At the same time, according to the forecasting service AccuWeather.com, the air had 100 percent relative humidity or was saturated.

"It's Buffalo all over again, or it could be," said John Goglia, a former member of the NTSB. "Icing, given those conditions, is certainly going to be high on the list of things to look at for the investigators."

More Plane Crash News
Icing—and the pilot's reaction to it—is not only the leading suspicion in the investigation of the Continental Airlines plane crash last month near Buffalo, it's also not without precedent with the Pilatus-12.

According to former NTSB chairman Jim Hall there are similarities between the Montana crash and a 2005 incident near Bellefonte, Pa. in which a pilot and five passengers were killed. According to the New York Times the plane in both cases was the Pilatus PC 12/45, and in both there were reports of conditions conducive to icing at lower elevations. Eyewitnesses reported that the plane, like the Pilatus-12 that crashed in Montana, appeared to dive into the ground.

That's little comfort for the families of the 14 who lost their lives in a horrific plane crash on their way to an apparent skiing vacation Sunday.