The Crash of Flight 3407: A Picture Emerges…

When Continental Connection Flight 3407 made impact with the house in Clarence Center, New York late in the icy night of February 12th in a horrific plane crash, the Bombardier Dash 8 twin turboprop commuter plane was NOT on autopilot. 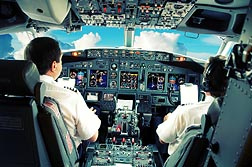 But it WAS, just 26 seconds before impact. That's when the aircraft's sensors detected a looming stall, which is aircraft speak for a pending catastrophic loss of lift over the plane's wings. When this happens, the 'shaker-stick' warning system kicks in, violently vibrating the plane's control yoke and meant to alert the pilot that a correction is necessary and immediate.

When this happens, the autopilot is disengaged automatically.

There was much confusion throughout media circles yesterday as to the role, and the appropriateness of having the autopilot engaged as it was, up to the last few fateful seconds of Flight 3407. The lead investigator for the National Transportation Safety Board (NTSB), Steve Chealander, cleared up a lot of the confusion during a news conference late in the day yesterday.

There were also some other matters that have been cleared up, if you will. Even though ice is thought to be a leading issue that brought down the plane, the conditions were not regarded as a so-called 'bad-weather day.' Even though the flight was delayed in Newark, New Jersey for up to two hours due to high winds, the decision to eventually launch the aircraft and proceed with the flight was not considered reckless, or mis-guided. Buffalo was reporting a combination of snow and mist, but there were no warnings of bad weather.

Thus—especially for flights in the northeast this time of year—things were considered pretty normal.

Chealander confirmed that according to the plane's flight data recorder, the deicing equipment was turned on 11 minutes into the flight, and the system remained turned on for the duration of the flight. Given the weather conditions reported out of Buffalo, this appeared to be a sound and precautionary decision—and quite conservative.

It has not been confirmed that the deicing equipment was actually working, or performing properly. All that can be established at this juncture is that the system was engaged.

It's important to note that the deicing system on the Bombardier turbo-prop commuter plane is not an 'anti-icing' system that is prevalent on larger airliners. Anti-icing systems prevent ice from actually forming. Deicing, on the other hand, does not prevent ice from forming, but works to prevent ice from building up. This is accomplished by a series of pneumatic rubber membranes, or boots, that are located at the front of the wings, and the tail sections of the aircraft that comprise the critical areas for flying. Compressed air is cycled through the membranes in stages, inflating the 'boots', which in turn crack any ice, which may have formed around them. The velocity of the aircraft will then simply clear the broken pieces of ice away.

The reason why icing is considered a suspect, is due to the fact the plane was only a year old with a clean record. Ice buildup would explain why the plane got into trouble, as ice buildup on the wings, for example, effectively changes the shape of the wing, which impacts the aerodynamics of the aircraft. A change in the aircraft's aerodynamics would require changes in speed, and trim, to compensate.

The mystery is that the aircraft deicing feature was engaged, and had been since 11 minutes out of Newark. And conditions at Buffalo Niagara International Airport, where the plane was headed, were not dire. Other planes landed successfully, both prior and following the crash of Flight 3407.

The use of the autopilot could be an issue. But here again, a lot depends on the interpretation of the weather at the time of the crash, and a disconnect between regulations outlined by the Federal Aviation Administration (FAA), and recommendations of the NTSB.

Everyone agrees that autopilots are an important aid to the pilot when on final approach, given the workloads a pilot normally has to fulfill in the course of his duties with a sophisticated aircraft. Thus, flying with the autopilot is standard procedure, even in bad weather.

However, with one caveat. The NTSB has long recommended that in icing conditions, pilots disengage the autopilot to gain a feel for the aircraft, and any changes in aerodynamics and other subtleties that would beg manual correction. It has been reported that many experienced pilots, in similar weather conditions, will prefer to take manual control of the plane for that very reason. They don't have to, but they opt to.

However, taking the plane off autopilot in icy weather is not an FAA requirement and while the NTSB would like to make it so, thus far it is only a recommendation to the FAA by the NTSB and is not couched in FAA regulatory authority. As well, protocols from both Colgan, the owner of the plane and manufacturer Bombardier state that autopilot should be used on approach except for 'severe icing.'

What no one can seem to agree on, is whether or not severe icing was present. The experienced pilot—and his co-pilot and First Officer, who was a young woman and a recent graduate, described 'significant' ice buildup on the aircraft's windscreen and the leading edge of the wing, once they started their decent to Buffalo.

If the aircraft was, indeed experiencing 'severe' icing, then both Colgan and Bombardier protocols require that the pilot disengage the autopilot manually and take control of the aircraft. However, if severe icing was not present, then it was perfectly normal to continue flying the aircraft on autopilot, as it was on this night until 26 seconds before impact.

"Thus far, we haven't determined that it was severe icing," Chealander said.

Beyond the icing issue, a picture is emerging as to what happened to the plane during that final, fateful and terror-filled 26 seconds.

Beyond the observation of 'significant icing,' Flight 3407 remained on autopilot until the aircraft's stall sensing mechanism detected imminent conditions for a stall and thus engaged the 'stick-shaker.' The system, according to reports, automatically pushes the stick forward to avoid a stall if the situation is not corrected in time.

The NTSB's Chealander confirmed that the autopilot was engaged until the stick-shaker, and the stick-pusher kicked in, signaling the start of an event that could have, and did have dire consequences. He went on to say that when this happens, the autopilot automatically disengages, putting the aircraft back in the hands of the pilot.

Which begs the question, which is better? A pilot making a decision to disengage the autopilot and take control of the plane in a proactive fashion, or be thrown to the lions when the aircraft encounters conditions for a stall and the aircraft is suddenly and automatically thrust into his hands?

This is what would have happened here. The flight data recorder revealed that the pilot, at some juncture activated a switch that triggered an anti-stall device that increases speed by 20 knots, and thus allowing a pilot a bit more of a margin for error to recover from a stall, should one occur.

Chealander, of the NTSB, was asked at a press conference if the pilot might have over-reacted by attempting to pull the yoke back, when the plane's stall avoidance mechanism was attempting to push it forward. While Chealander answered in the affirmative that it was possible, he was quick to remind those gathered that the investigation is still very much in the early stages. He was careful not to be critical of the pilot.

"Everything that should have been done was done, so we keep looking," he said. "We keep looking, trying to find out why this happened." What is known is that the aircraft pitched, and rolled violently in its last remaining seconds in the air. According to the flight data recorder the plane nosed up 31 degrees, before pitching down 45 degrees. It then rolled to the left 46 degrees, before snapping back to the right at 105 degrees, or 15 degrees past vertical. At 90 degrees, the plane's left wing would have been pointing straight up. At 15 degrees beyond vertical, it was beginning to roll upside down.

Radar data showed that Flight 3407 went from 1800 feet above seal level, to the 1000-foot level in an incredible 5 seconds. Frightened passengers would have experienced G-forces twice that of normal, in the final few seconds of flight.

Flight data recorders indicated that the event which doomed Flight 3407 began when the flight crew lowered the landing gear, and extended the flaps in an effort to slow the plane down for approach to Buffalo Niagara International Airport, a mere six miles away.

More PLANE CRASH News
However, as this happened, the nose of the aircraft pitched up, behaviors consistent with an increase in drag and the beginnings of a stall. The aircraft would have commenced it's staggering decent at this point, as the flight crew, during the next 26 seconds, attempted to save the plane by retracting the landing gear, raising the flaps and pouring on full power to the engines. Reports indicate the engines, examined on the ground, appeared to be in good working order, and it is believed that the propellers were intact.

The working theory at this point is that the plane did, indeed come down intact, and thus was not likely missing any piece of vital equipment that would have contributed to a crash.

Just prior to crashing into the house, the aircraft spun around to a 180-degree angle and was pointed in the opposite direction to the airport when it hit the structure.

And contrary to earlier reports, the plane did not nose into the house, but rather landed practically flat, on its belly. Given the debris field that did not extend much beyond the footprint of the home it crashed into, it appears the doomed plane had little, to no forward motion when it hit—effectively falling out of the sky.