The Crash of Flight 3407: Ice Buildup the Lead Theory

While the investigation is ongoing, it appears that ice buildup on the wings remains the likely cause of the horrific plane crash in a town near Buffalo, New York February 12th that claimed the lives of 49 people in the air, and one on the ground. 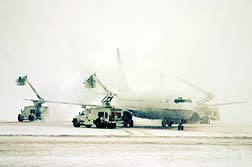 For 36 hours investigators have been pouring over the crash site in Clarence Center, in the rubble where a house once stood and an intact tail section remains the only visible reminder of an aircraft. Black boxes and flight recorders have been recovered, and are in the process of being analyzed.

And while it is still too early to tell, it appears to be ice.

Investigators reveal that the crew of Continental Connection Flight 3407 seemed to be operating a routine flight, with no hint of distress, when the pilot reported a buildup of ice on the windscreen, and the wings of the aircraft. The plane, a Bombardier Dash-8 twin Turboprop commuter plane built in Canada, was on approach for landing at Buffalo Niagara International Airport from Newark, New Jersey when it apparently ran into trouble.

Whether or not the plane should have taken off at all from Newark remains a question that some feel needs to be answered. As it was, the flight was delayed given severe weather conditions at Newark that persisted into the wee hours of Friday morning.

The latter is when the upper atmosphere is not quite cold enough to produce snow, but the rain that falls immediately freezes upon hitting cold surfaces subjected to prolonged exposure to temperatures that can hover just above, at, or below freezing.

While there were no reports of freezing rain at the time of the crash, a winter storm that involved a combination of snow and mist was blowing through the area at the time, and there were significant amounts of moisture in the air.

When moisture meets a cold surface, you suddenly have ice.

Large, commercial airliners have thermal de-icing systems that actually warm the wings of the aircraft. Smaller planes, such as the Bombardier Dash-8, use a system of pneumatic boots. A rubber membrane is stretched over the wing, and when engaged is filled with compressed air. The air in turn inflates the boot and serves to crack, and break the ice forming around it.

It is not known if this form of de-icing is as effective as the thermal system on larger aircraft. However, following a similar crash of a turboprop commuter plane 15 years ago due to ice buildup on the wings, the National Transportation Safety Board (NTSB) recommended the aggressive use of pneumatic boots for de-icing. It should be noted that the US Federal Aviation Administration (FAA) has yet, after 15 years, to adopt the recommendation.

No matter. The plane carrying 44 passengers, a flight-crew of four and a fifth employee who was off-duty and deadheading back to Buffalo in a jump seat on the flight deck, was built in Canada and is equipped with the pneumatic de-icing equipment. The plane is also highly regarded by pilots, who view the Dash-8 twin turboprop has a workhorse and highly reliable.

It has been reported that there were no outstanding issues with the plane that disappeared from radar and slammed into a house in Clarence Center at about 10:20pm Thursday night. The 74-seat Q400 aircraft was new, and had a clean safety record, according to the Associated Press.

The pilot, identified as Captain Marvin Renslow, was experienced with more than 3000 hours of flying time over the nearly 3 ½ years he had been flying for Colgan, the company that owned the plane. That number of hours is just about at the maximum a pilot is allowed to fly over that period of time.

Was it deployed too late?

A spokesperson for the NTSB said yesterday that the crew discussed "significant ice buildup" on the windscreen, and the leading edge of the wings, at 11,000 feet. "Icing, if a significant buildup, is an aerodynamic impediment, if you will," Steve Chealander said. "Airplanes are built with wings that are shaped a certain way. If you have too much ice, the shape of the wing can change requiring different airspeeds."

Other pilots familiar with flying in those conditions, have suggested the crew would have had little time, once rime ice builds up on the wings to such an extent that pilots no longer have effective control of the plane. When asked why the crew did not call a 'Mayday' by Larry King on CNN last night, a flying expert commenting on King's program said there would not have been time. Thirty seconds, and it would have been over.

Eyewitnesses have reported that the plane was making 'sputtering' sounds as it was coming in on approach for landing. One eyewitness said that the left wing was pitching lower than the right, and that the nose was down.

One of the survivors, who was in the house the plane hit, commented to WBEN-AM radio that she was watching TV in the family room of their home when she heard a noise.

More Plane Crash News
"Planes do go over our house, but this one just sounded really different, louder, and I thought to myself, `If that's a plane, it's going to hit something,'" Karen Wielinski told the station. "The next thing I knew the ceiling was on me."

The landing gear had been lowered, and the wing flaps set for approach. "The crew attempted to raise the gear and [reset] flaps shortly before the recordings ended," he said. the NTSB's Chealander said.

It should be noted that in spite of a mix of sleet and snow in the area, other planes landed succesfully. But other pilots had also reported significant ice buildup at the time