"You have no idea, the incredible guilt I feel about taking Paxil during my pregnancy," says Gina Fromm, "but the hardest thing is that, when Mark is old enough to understand, will he blame me?"

As soon as Gina found out that she was pregnant, she and her husband, Jon, asked both their regular doctor and obstetrician if it was okay to continue taking Paxil. Both of them referred to the pharmaceutical reference book and determined it was safe. 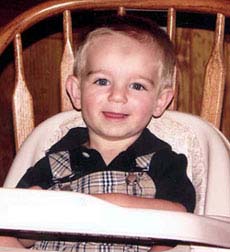 That was in 2004. Today the Fromms would get a different answer. Gina was on Paxil throughout her pregnancy. "I went with Gina to every OB appointment," says Jon, "and every time she would ask if it was still safe to take Paxil. She did everything by the book - prenatal vitamins, no caffeine..."

It wasn't until Mark was a few hours old that one of their pediatricians discovered a heart murmur - which is normally of little concern as a high number of babies are born with murmurs which are usually corrected within 48 hours. Still, it worried Jon and Gina.

"Mark was a perfect little baby when he was born and I had no idea that he could have anything wrong; it was such a shock to us," says Gina. "One of our pediatricians set up an appointment with the cardiologist just to be on the safe side. Mark was born on Wednesday, we went home on Sunday and saw the cardiologist first thing Monday morning, February 7th, 2005 - a date that is burnt into my memory.

Mark had a battery of tests at the heart center of Childrens Hospital. "Afterward, when the cardiologist met with us, the look on his face made our world stop," says Gina.

"He said to us, 'I wish I could tell you good news but there is a problem.' At this point I think my heart stopped. 'Mark's tricuspid valve never developed and he will need surgery,' he explained." 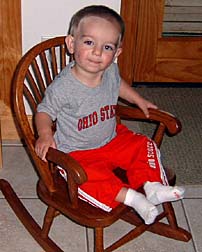 More tests were needed. Fortunately, Mark had enough pulmonary blood flow that surgery could be postponed until he was seven weeks old. At this time, they put in a shunt. "When those operating doors closed, I just can't describe the overwhelming, over-the-top anxiety," says Gina. "After the surgery, he was so swollen and so tiny with so many tubes attached to his little body and we couldn't touch him, we could only just stare," says Jon. "It was like someone was stabbing me in the heart."

But Mark still required open-heart surgery to fix his valve. The Fromms went to the cardiologist and pediatrician on a weekly basis, monitoring Mark's vitals. "They told us that, with Mark's condition, babies can turn blue because they don't have enough oxygenated blood," says Gina. "We have gone through many incidents when his lips and tips of his fingers turn blue."

The next months went by without a hitch and the cardiologist scheduled the first part of the surgery to re-route Mark's blood flow. Last November, at nine months old, he had open heart surgery. "We were in the hospital for eight days and so far, so good," says Gina, "and now they are planning the final and hopefully last, surgery for this fall, 2007. Although Mark is doing well now, we don't know his prognosis and we don't know what the long term effects will be."

I asked Gina and Jon how they discovered the link between Paxil and possible birth defects. Last fall Gina was watching CNN and the ticker at the bottom of their TV screen flashed a warning about Paxil and birth defects. "I was in the kitchen fixing dinner and Gina walked in, all the color was drained from her face and she told me what she had just read," says Jon. Then Jon did some research on the Internet and found a whole lot more information about Paxil warnings and birth defects. And many more people whose children had similar side effects. 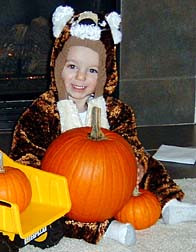 This is what Gina and Jon want to say to SmithKline Beecham, the makers of Paxil: "Is our son's life not worth more than the price of a prescription?"

More News
"It is unbelievable to me that a company this size can be so irresponsible, and how they lied," says Jon. "And the toll it takes on our entire family, not only my son's life," says Gina. "How many people are going through this and not realizing Paxil is to blame? Still, to this day, some doctors have no idea.

"Now we have the facts about Paxil and next time I see my doctor I will talk to him and find out what they are doing about warning others. By the time I found out I was pregnant, my son's heart was already developing. [The drug makers and the medical community] have to make sure that women know about Paxil before they decide to get pregnant so they can make an educated decision. And the side effects from withdrawal are awful."

The Fromm's 2006 Christmas was spent in the emergency room of Childrens' Hospital. Mark had a fever close to 105 and could easily have gone into convulsions...