Oxycontin More Popular than Heroin on Canada's Streets: Lawsuits on the Rise

A University of Victoria study, encompassing seven Canadian cities, has revealed that Oxycontin and other prescription opioids are more popular than heroin among drug abusers in Canada.

The study, published in the Canadian Medical Association Journal, echoes the belief of many Canadians that not enough is being done to stop the abuse of prescription drugs in Canada. Lawsuits across the country are alleging that OxyContin's maker knew, or ought to have known, that ingesting Oxycontin leads to drug dependency and addiction. 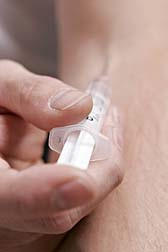 The Victoria research team, led by Dr. Benedikt Fischer, found that heroin use has become an increasingly marginal form of drug use among illicit opioid users in Canada.

Dr. Fischer said that in most cases, prescription opioids used by street drug users originated from the medical system and not from illicit production and distribution. In view of the findings, the team called for greater drug regulation.

The study also takes issue with "current drug control policies and treatment programs in Canada". Critics have expressed skepticism about the labeling of prescription drugs such as Oxycontin in Canada, arguing that overprescription of the drug has lead to rampant use on the street.

A long acting dosage form of the drug was approved by Health Canada six years ago. While formulated to be time-released, it was soon discovered that, if ground up and inhaled or injected, it can produce a heroin-like effect. Oxycontin addiction has since become an epidemic in Canada, with hundreds of deaths associated with the drug.

About the Study
Experts say the study is the first systematic documentation of drug use patterns among street drug users and the best to date on the issue of prescription opioid abuse in Canada.

The study was started in 2001 and its results are based mainly on a follow-up sample of 585 participants from seven Canadian cities: Vancouver, Edmonton, Toronto, Montreal, Quebec, Fredericton and St. John.

Problem Encompasses "All Provinces and Territories"
The abuse of prescription drugs like Oxycontin and other illegal drugs has increased and has had a profound effect on the community, and citizens are taking action by filing lawsuits against the makers of the drug. Many provinces are also considering lawsuits.

According to CBC News: "OxyContin has emerged as such a serious public health threat in Newfoundland and Labrador that [the provincial government has] commissioned a task force to deal with it."

"It's not just a rural problem and it's not just an Atlantic Provinces problem," notes one drug addictions expert. "It affects all provinces and territories...Families need help, and drug companies need to be held accountable."

Canadian Response to US Settlement
In the U.S., Purdue Pharma and three executives recently admitted to charges of misbranding, and will pay $634.5 million in fines for claiming the drug was less addictive and less subject to abuse than other pain medications.

Maureen Harvey of Newfoundland, who became an advocate for families of addicts when her daughter became hooked on OxyContin, said she was shocked by disclosures from the U.S. case.

"I'm appalled that humans could do this," Harvey told CBC News. "I can't imagine how they could knowingly do this type of thing."

If you or a loved one has become addicted to Oxycontin, please contact a lawyer involved in the [OxyContin, Canada Lawsuit] who will review your case at no cost or obligation.
Request Legal Help Now

Posted by
Gigi Jacobs
on November 17, 2013
I'm so tired of people who know nothing of drugs complaining about something they have no business even talking about. In the US, people took oxycontin for pain. Then it became politically incorrect and the regulations came down so hard, that I have people chronically ill and with chronic pain who can't even get a script filled for their own documented pain.

As far as it being dangerous, studies show that every time a drug like Oxycontin is stopped, people turn to heroin-street heroin. If anyone is worried about over doses of oxycontin, you better get worried about over doses from all those who switch to heroin as it becomes harder to get oxycontin. Because with a prescription drug, one knows how much they are taking and exactly what they are taking. Want to kill more people? Just outlaw the prescription versions and start counting all the heroin deaths as people don't know what nor how much they are getting.

I'm a researcher and I base my information on facts and not on what's popular. And the fact is that the interference from those who have no business dictating drug laws has caused even more deaths from the abuse of even more dangerous street versions. And to boot, I know of so many in chronic pain who can't get pain medications for the life of them. Congratulations for sticking your nose into something you know nothing about and all the additional suffering you have caused so many.

Posted by
Tina
on February 20, 2012
Oxycontin, so easily given to patients for illegitimate pain, then when the addiction and abuse over the highly addictive pain reliever takes over a patient. There is NO help and people end up being turned away. Even when they beg and do all proper steps that are asked of them to start the process of recovery treatment. My Partner and myself have found ourselves left in this situation.
Where is the help and treatment for the people who become addicted to these HIGHLY addictive drugs???
We have been searching and seeking out help, but have been so easily turned away.