The arrest of actress Lindsay Lohan and the various reports of her addiction to OxyContin have thrust the prescription painkiller back into the news. It has been suggested that OxyContin is quickly becoming the most coveted drug on the street. And Canada's Centre for Addiction and Mental Health (CAMH) pulls no punches when it comes to OxyContin. 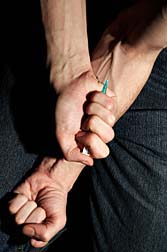 "And no, we're not talking about an illegal narcotic like heroin. OxyContin is a legal narcotic drug available in Canada as well as the U.S. and is prescribed for the relief of intense and chronic pain.

The problem with OxyContin, which is sold in capsule form and is taken orally, is what's in it, what's not, and the way the entire capsule is formulated.

The primary ingredient in Oxycontin is oxycodone, which is an opioid drug along the lines of morphine, codeine, heroin and methadone. Oxycodone is in other painkillers too, such as Percocet - a prescription medication also assigned to patients in need of pain relief after surgery, an injury, or other chronic illness.

Percocet, for comparison, contains 5 mg of oxycodone, and is designed for pain relief for about five hours. It also contains acetaminophen, which is what you'll find in Tylenol. Acetaminophen has a tendency to make you ill, if you take too much of it.

OxyContin, on the other hand, contains nothing BUT oxycodone; the genuine article in its purest form. There is nothing in OxyContin to make you sick; to serve as a red flag that you may have abused it. What's more, you can be prescribed OxyContin in 10, 20, 40 or even 80 mg of oxycodone, which packs a powerful punch if taken all at once.

Of course, the active (and lone) ingredient in OxyContin wasn't designed to be taken all at once, and the time-release characteristic of the capsule was meant to control the flow of oxycodone into your body. Hence the promise of slow-release, continuous pain relief for up to 12 hours.

Problem is, even the best ideas can go off the rails. Not that OxyContin was a good idea to begin with, given how easy it is to do an end-run around Perdue Pharma's much-heralded time-release system.

In other words, all you have to do is grind the capsule up, and you get the full impact of oxycodone all at once. The druggies call it getting a rush, and it didn't take long for word to spread on the street that there was a legal prescription narcotic that could make you high.

They even gave it a name: 'Oxy' or 'OC,' and some people have been known to shoot it directly into their veins like heroin.

This so-called 'Hillbilly Heroin' that runs rampant through mostly economically-depressed and rural regions in the U.S., is an equally serious problem in the Great White North. In 2003, for example, 2.8 million prescriptions were written for oxycodone drugs in Canada; most of those prescriptions filled in Ontario. That same year, CTV.ca reported that more than 100 deaths were registered in the province among individuals with oxycodone present in the bloodstream, a ten-fold increase from a decade earlier.

The problem is especially apparent in the Atlantic provinces, where a task force in 2004 recommended various initiatives ranging from youth education programs, to tamper-proof prescription pads.

Two of those Atlantic provinces, Newfoundland and Labrador, are considering a lawsuit against the makers of OxyContin, Perdue Pharma, in an effort to recover tax dollars spent treating Oxy addicts, and other provinces are said to be weighing their options.

This all comes in the wake of the decision, earlier this month in a Virginia court, of a ruling against Perdue Pharma and three of its top executives over misbranding of OxyContin. The company admitted that it knew of the drug's highly-addictive pedigree, but Perdue Pharma not only played down the risk, but undertook to sing its praises and claim that the drug's time-release formula would easily prevent abuse.

How wrong were they? U.S. $600 million wrong - the monetary settlement in the Perdue Pharma case that saw three of its most-senior executives plead guilty to misbranding, which is a criminal offence.

Meantime, in Canada the CMAH continues its' quest to bring Canadians up to speed on OxyContin, and its addictive qualities. How addictive is it?

Addictive enough to put you in withdrawal, and potentially ruin your life.

And the makers of OxyContin knew it all along.

If you or a loved one live in Canada and have become addicted to Oxycontin, please contact a [OxyContin, Canada Lawyer] who will review your case at no cost or obligation.
Request Legal Help Now

Posted by
Pain sufferer
on September 16, 2014
Because of Pam Bondi, AG here in FL, dr's are afraid to prescribe pain meds for fear of being arrested. I agree that these meds should not be prescribed to people looking to get high but for some of us it is necessary so as not to SUFFER in pain on a daily basis!! Our quality of life depends on it! I am afraid this has turned into another politician campaign. A "feather in her cap" for re-election. This is not fair to those of us who absolutely need pain relief. I fear there will be mass suicides if this continues & in the state of Florida, with so many retirees & elderly, I can't help but wonder if this may actually be their goal!
Posted by
kayla shawn
on October 25, 2012
you should not start drugs esause it is had to get off of!!!!!!!
Posted by
wallace p
on June 1, 2012
I got prescribed oxycontin after surgery I took it for three months and then my doctor said I didn't need it anymore I agreed after two days of being off it I wanted to die I was so sick I couldn't move so then it became a problem my life couldn't go on with out it to function normally so I had to be put on methadone to get off it my advise stay away its terriable to withdrawl from it but im off methadone know but it took 3yrs to get completely off it so for three months of pain after surgey it took 3yrs to get rid of the withdrawls its a terriable drug stay away from it.
Posted by
peanut
on May 3, 2012
it hass gotten so bad in my area that the people who truly need pain meds. cannot get any help and i set in constant pain because of pillheads its a mess, doctors are scared to write them and my life is always pain always
Posted by
donnie
on September 23, 2011
it is sold on the streets and taken recreationally but it does have the benefit of ridding one of the pains of cancer or they surgery and/or procedures associated with certain diseases as in the case of my mother who had a operation and was prescribed it but did not get addicted nor did she accept the doctors prescription for it after she left the hospital. my point being the few who need it shouldn't be denied it just cause some doctor accepted a bribe or believed some fake story without confirming it before prescribing the medication in quantity to someone who wanted a fix or a free high