Court: Donning and Doffing Not Offset by Paid Break Time

A recent ruling in Pennsylvania could have implications for California donning and doffing lawsuits although how far-reaching the implications are remains to be seen. The Pennsylvania donning and doffing lawsuit involved claims that employers should not be able to offset overtime by paying employees for break time. The Pennsylvania Third Circuit Court of Appeals agreed with the employees, but what the lawsuit means for California overtime lawsuits and similar claims in other states is not yet known. 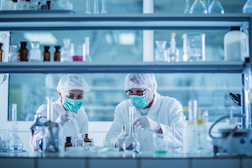 The lawsuit (Smiley v. El DuPont de Nemours & Co., No. 14-4583) was filed by employees of DuPont who claimed they were owed overtime compensation for the time they spent donning and doffing uniforms and protective gear and conducting "shift relief" before and after their shifts. DuPont argued that because it paid employees for meal breaks, it could offset that pay against the overtime.

According to court documents, employees worked 12-hour shifts at DuPont's manufacturing plants but were required onsite before and after shifts to don and doff uniforms and protective gear. They were also required to share the status of work between outgoing and incoming shift employees. This time spent donning and doffing and providing shift relief could add an extra 30 to 60 minutes to each shift.

DuPont paid employees for their meal breaks and this pay was calculated into pay stubs as part of the total hours worked weekly. But employees filed the lawsuit arguing that they were required to perform work before and after their 12-hour shifts without being paid overtime. DuPont argued that the compensation offered during meal and rest breaks offset the donning and doffing time.

More CALIFORNIA OVERTIME News
The District Court granted DuPont's motion for summary judgment, finding that because the paid break time exceeded the unpaid work time the plaintiffs were not owed compensation. The plaintiffs filed an appeal and the Pennsylvania Third Circuit Court of Appeals found in favor of the employees noting "Nothing in the FLSA [Fair Labor Standards Act] authorizes the type of offsetting DuPont advances here…"

As a result, the court reversed the dismissal and remanded the lawsuit for further proceedings.

The FLSA does allow for some situations in which an employer can offset compensation, but the US Court of Appeals for the Third Circuit ruled that paying employees for their meal and rest break is not one such situation.

The case was heard in Pennsylvania, so its impact on similar California lawsuits or claims in other states remains to be seen