Walmart Could Owe $100 Million in Back Pay

A federal judge has ruled that Walmart violated California minimum wage laws in its payment of truck drivers. The judge made the ruling in late May, finding Walmart did not pay its truck drivers at least minimum wage for all time worked. Under Walmart’s pay policies, truck drivers are paid by mileage and activity, not by the hour, meaning they may not be paid minimum wage when all work-related duties are factored in. 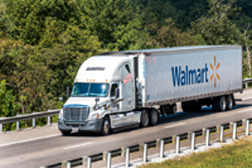 Walmart argued that such activities are covered by other activities for which the drivers are paid, that drivers are paid for their time through discretionary pay, and that because drivers are not under Walmart’s control during layovers, the company is not required to pay the minimum wage.

Furthermore, Judge Illston found that Walmart’s drivers were required to take layovers in “designated places,” meaning the drivers were subject to Walmart’s control.

“Wal-Mart exercised a high level of control over its drivers by specifying the location for a paid layover and prohibiting payment for layovers taken at the driver’s residence without prior authorization,” Judge Illston wrote. As such, the drivers should be paid for layover periods in which they were subject to Walmart’s control.

Finally, Judge Illston found that paying truck drivers discretionary pay for some of the activities indicated the practice was a deviation from standard policy. In other words, because Walmart used the discretionary pay as an exemption, its pay policies are still a violation of California labor law.

More CALIFORNIA OVERTIME News
Since this article was posted, Walmart has reached out to LawyersandSettlements with the following statement: “We are proud that our drivers are among the best paid in the industry, earning, on average, between $80,000 to over $100,000 per year. Walmart is a great place to work, as demonstrated by the fact that more than 90 percent of our drivers have been with the company for more than 10 years. We disagree with the district court’s decision. There has been no finding that any Walmart driver has not been paid minimum wage for each hour worked. We intend to continue to defend the company against the claim.”