In another case testing Calfornia's overtime labor laws, a federal appeals court has ruled that unionized workers in California who are required by their employers to travel from gathering places to daily work sites must be paid for travel time, unless their contracts expressly say otherwise.

The ruling of the Ninth U.S. Circuit Court of Appeals in San Francisco June 20 overturned a trial level decision that while non-unionized workers in construction and other industries had to be paid for travel time under California labor rules, workers unionized under federal labor law could not make the same claim. 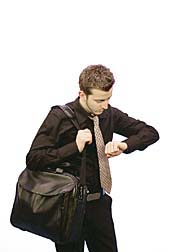 That decision would have put California non-unionized workers in a better position than California union members. The Court of Appeals said the lower court decision would, in effect, penalize workers for joining a union, which would contradict the goals of federal labor law.

"A unionized employee cannot be deprived of the full protections afforded by state law simply by virtue of the fact that her union has entered into a (labor contract)," said Judge Marsha Berzon in the unanimous ruling of the court.

The ruling does not entitle workers for receive pay for the time spent in their daily commute to work, but covers those, such as workers in construction and logging, who are required to assemble in certain locations before heading to their worksites. Federal law does not entitle them to be paid for travel time unless their union contract requires it. But California's labor laws say such workers are entitled to travel time pay.

The decision this week revived a lawsuit by about 270 past and present employees of Kiewit Pacific Corp, who installed duct and fiber-optic lines on two Southern California projects over several years starting in 2000.

More News
The plaintiffs in that action alleged that their employer required workers to meet at particular places each day, get equipment and instructions, and then travel to and from job sites in company vehicles. They said they each spent about 2 and one-half hours each day meeting and traveling, and were never paid for their time. They claim they are owed at least $16 million in wages and overtime.

Some of Kiewit's workers belonged to unions whose contracts provided for travel pay, but others were covered by contracts that did not specifically make the provision.

The attorney for the workers, George Schaefer, said the appeals court ruling is potentially an important precedent for the proposition that any state laws, current or future, that establish rights for workers can be applied equally to all workers in the state.

If you work in California and you feel that you are owed overtime pay, please contact a [California Overtime Lawyer] who will review your case at no cost or obligation.
Request Legal Help Now