A nurses' strike set to begin today has been averted thanks to negotiation of a tentative three-year contract between the nurses union and Sharp HealthCare negotiators, defusing one of two bombs planted by the nurses on Sharps doorstep. Sharp was accused of not paying its California employees overtime. 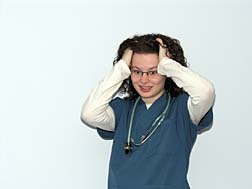 The San Diego Union-Tribune reported that about 1,700 of Sharp's 3,400 staff nurses are members of United Nurses Association of California/Union of Health Care Professionals, and are eligible to vote on the proposal August 9.

But lurking behind the strike threat is that other bomb. The day the nurses voted to go on strike, June 29, they also filed a multi-million dollar lawsuit against Sharp, claiming that Sharp is not paying employees for working overtime (a charge the hospital denies).

The nurses will almost certainly win some or all of the money they are claiming, because California's labor laws dealing with overtime, meal breaks and rest breaks, are simply unbendable. You can't opt out. The employer is either complying with them to the letter, or it is in violation. It simply can't be a little bit pregnant.

The landslide of overtime lawsuits in California started after the enactment of a new law, the Labor Code Private Attorneys General Act of 2004, that made it ok for individual employees and groups of employees to sue an employer for a single violation of the California labor code.

It also lets an employee claim 25% of the civil penalties due from the employer on behalf of himself or herself, and all other current and former employees. The other 75% goes to the government to promote labor education. This has turned into a massive money-raiser: penalties start at $100 per employee, per pay period, per violation, in addition to attorneys' fees and costs.

On average, one or more class actions or lawsuits have been filed under the new law every day in California in the last 12 months, a dramatic increase since it came into force.

Employers both hate and fear the new law. They call it the "Bounty Hunter" law, and attempt to ridicule the lawyers who are now able to recover fair compensation for employees directly from the courts. But the lawyers are just representing workers whose employers have abused their rights for years, workers who have been routinely disadvantaged in any negotiations with the boss.

More News
The employers complaining most loudly about bounty hunters are the very ones who underpaid their workers. You have to look to the criticizer, not the criticism.

Now, some of the big players are banding together behind a big business pressure group, the Civil Justice Association of California, to fight the new law. They have filed an anti-consumer, anti-worker initiative to limit the rights of individuals, alone or in class actions, to pull these corporations into court to answer for their policies and practices.

One of the corporations behind the CJAC initiative is CNA Insurance Companies. It recently settled a case in which 500 employees had sued for overtime denied by CNA, even though the employees dealt with large workloads and had to work evenings and weekends.

CNA settled by paying the employees the overtime back pay.