Employers Sent to Jail for Failure to Pay Overtime

California overtime laws are designed to ensure that vulnerable employees, such as domestic workers, who are frequently victims of the violations of California labor law overtime, receive proper overtime pay. Failure to pay overtime wages to employees can result in jail time, as a California couple discovered last month. 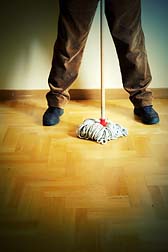 The lawsuit, filed on behalf of at least 385 workers, alleged that the company, Southern California Maid Service & Carpet Cleaning, misclassified its workers as independent contractors, denying them overtime pay and minimum wages. According to an article published on November 8 in Occupational Health & Safety, the couple, Sergio Maldonado and Lorenza Rubio, were ordered to pay the workers $3.5 million in back wages and an additional $1 million in liquidated damages in August, 2007.

However, the couple did not pay up. In September, 2008, the Department of Labor filed civil contempt charges against the company. As of April of 2009, the court has ordered daily fines of $2,400 from the company and $200 per day from both Maldonado and Rubio. Their failure to make the payments resulted in their arrest at the end of October.

More CALIFORNIA OVERTIME News
The couple was released with the order that they pay $30,000 by November 5 and the remaining amount by November 12.

"It is unconscionable that an employer would continue to disregard the obligation to pay vulnerable workers, even after being ordered to do so by a federal judge," said Secretary of Labor Hilda L. Solis, as quoted in Occupational Health & Safety.

If you have suffered losses in this case, please send your complaint to a lawyer who will review your possible [California Overtime Lawsuit] at no cost or obligation.
Request Legal Help Now