The LA Times reported May 30, 2007 that a handful of workers -- deported following an immigration sweep across California and 16 other states earlier this year -- are back in the country illegally and, in an interesting twist, are now claiming back wages in unpaid overtime they say their former employer owes them. 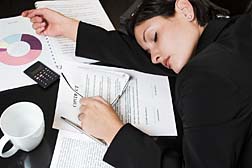 A New York state community newspaper, The Journal News, also reports that five regional construction companies have made a deal with the U.S. Department of Labor to pay workers unpaid overtime in monthly payments stretching into 2010.

And Forbes.com reports that Casey's General Stores Inc., a company operating 1,463 convenience stores in Iowa, Illinois, Indiana, Kansas, Minnesota, Missouri, Nebraska, Sough Dakota and Wisconsin, was named in a potential class action filed in the U.S. District of Sioux City by two assistant store managers who claim the company refused to pay them for overtime.

What's happening?
Here's what's happening: All the little guys (and gals) who thought they couldn't do anything about shoddy treatment from employers, are now finding the courage and the legal help to actually force employers in violation of federal and state labor codes to straighten up and fly right. It's about time.

In the mid-west: The convenience store managers...
The California and Iowa attorneys for the Casey's store managers say there could be thousands of current and former assistant managers in the class, assuming class-action status is granted. They also say that failure to pay overtime is a serious violation of federal law.

Says Kristina Jones, a former assistant manager and a plaintiff in the case: "I was required to work several hours per week off the clock. Casey's relied heavily on assistant managers to pick up the slack and keep the store running but failed to pay me all of my overtime."

In New York state: The construction workers...
The U.S. Labor Department went after the five New York state construction companies for failure to pay 55 workers overtime despite their working more than 40 hours a week, going back as far as August 2001. The companies settled, and although admitting no wrongdoing, they agreed to pay out $120,000, plus interest, to the workers in 43 monthly payments. They were able to persuade the Labor Department that that was the only way the money could be refunded.

In California and Florida: The janitorial workers...
And as to the returning deportees? It turns out the four of them were among 200 workers nabbed in raids at 60 chain restaurants in Anaheim and West Hollywood, where they had been employed by Florida-based janitorial firm Rosenbaum-Cunningham International (RCI) which had contracted to supply janitorial services at the sites.

They were helped by the Mexican Consul in Santa Ana to file a complaint with the Department of Labor. They say they were working seven days a week, at least nine hours a day, earning $5.15 to $6.34 an hour, whereas California's minimum wage is $7.50 an hour. They also say they may join a class action lawsuit already underway against RCI in Pennsylvania.

More News
Deanne Amaden, speaking for the U.S. Department of Labor, and quoted in the LA Times, says that the government protects all workers no matter their immigration status. "If the Fair Labor Standards Act is not enforced with some workers...all that does is...encourage employers to hire illegal workers. That exacerbates the problem."

RCI is in a whole lot of trouble. It was also charged this year with tax evasion. The indictment filed says they received more than $54 million from chain restaurant clients from 2001 to 2005, but by failing to withhold taxes from workers or pay for their Social Security and other payments, they avoided payments of about $18 million.

Everyone Gets Hurt
You can see wider problems created by employers who cheat on wages for illegal workers: It not only hurts the workers, it hits every U.S. taxpayer in the pocketbook.