An oil accident of unknown origin spilled almost 700 gallons of oil in a channel off the coast of California that drains to wetlands and the Pacific Ocean, reported the Los Angeles Times this morning. 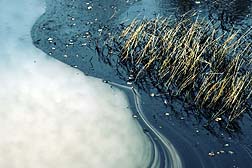 Petroleum is regularly shipped in tankers that are often old and rusted. Presumably, the spill originated either from a tanker with a massive leak in its holding tank or from some unknown entity or persons who deliberately dumped unwanted oil into the channel. It may also have leached into the water from a land-based holding facility.

The oil slick is currently being contained and did not reach the Talbert wetlands or the ocean, according to Robert Wise, the on-scene coordinator for the Environmental Protection Agency (EPA).

Reports of an odor resembling petroleum first caught the EPA's attention on January 21. A day later public works crews from Orange County located the spill in the Huntington Beach Channel east of Beach Boulevard and south of Adams Avenue in the flood-control channel.

More OIL AND GAS ACCIDENTS News
Officials estimate that 672 gallons of oil had been spilled. "There was oil all the way across the channel from wall to wall," said Wise. "As the tide went in and out, it just sloshed the oil up and down the walls of the channel."

The oil traveled approximately 1.8 miles downstream before authorities began to contain and eradicate the spill. A contractor hired by Orange County is cleaning up the spill by placing containment barriers in the 50-foot-wide, steel-lined channel and using vacuum trucks, absorbent materials and power washers. So far, Wise said, crews have removed about one-eighth of the oil.

The cleanup is expected to take about three weeks.

While containment efforts have become increasingly modernized and effective in recent years, oil accidents pose a significant danger to wetlands, wildlife and anything that depends on a natural water supply for sustainment. An oil slick in sea water can also have a negative impact on real estate values in a populated area.