“Debra Winger and Mark Ruffalo have been integral to our fight against fracking, and the anti-fracking celeb list is gaining momentum in large part because of them,” says Ramsay Adams, Founder and Director of Catskill Mountainkeeper, an environmental advocacy organization dedicated to protecting the Catskill Region in New York State. 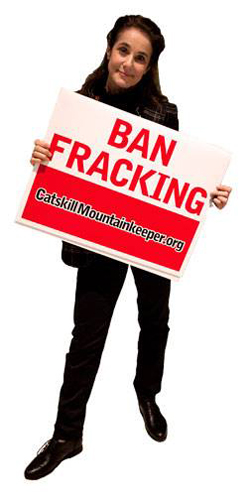 Adams says that most people, him included, were unaware of fracking contamination until seven or eight years ago. When fracking appeared on his radar, he rallied the troops, including Winger and Ruffalo.

“The incident that first raised my awareness involved a local farmer,” says Adams. “She came into my office and said a landman [people who perform specific services for the oil and gas industry, such as ‘strong-arming’ people to sign leases] wanted to lease her land. I didn’t know that any gas was here but was I wrong!” Subsequently, the Catskill Mountainkeeper organization was the first to raise awareness of fracking on the East Coast. As for the farmer, she never did lease her land. Instead, she joined the movement against fracking.

Adams and his group began to hold public information forums in and around the Catskills. Around this same time, filmmaker Josh Fox started to video communities impacted by fracking. “Debra Winger saw the footage of Gasland - she has a home in the Catskills - and immediately got involved,” says Adams.

“Debra’s home is the Catskills; she raises her two sons here,” Adams adds. “Debra told me that she found respite here after the intensity of Hollywood. There is no value for Debra’s career to be an anti-fracking activist but she decided to take on the fracking industry regardless; fully aware of the vicious and vitriolic attacks from the oil and gas industry. She bravely went out there and paved the way for other celebs, such as Mark Ruffalo.”

Four years ago, Adams was in a restaurant and recognized Ruffalo, who lived near the Delaware River. “I introduced myself and Mark said, ‘Dude, I love you guys! Let me know if there is anything I can do for the cause.’ He gave me his phone number and came with me, Bobby Kennedy Jr, and other environmentalists to gas fields and fracking sites in Pennsylvania,” says Adams.

Adams says that Ruffalo was so moved by that trip that he joined the Catskill Mountainkeeper Board of Directors, along with Kennedy and actress Michele Williams.

“Mark took on the fight against fracking ferociously, like none of us could have hoped for or predicted,” Adams says. “He rallied friends, met with Governor Cuomo’s staff and showed up at every rally. He made himself accessible to the people of New York - he would talk to an 80-year-old or a high school student. Mark can make you feel part of something exciting and big, and like Debra, he was the game changer against fracking.”

Winger and Ruffalo also opened the door for Artists Against Fracking, which Adams co-founded and now includes more than 200 artists - from Yoko Ono and Sean Lennon to Lady Gaga.

“What started out as a small cause has transformed into the largest grass roots movement in America in the last 30 years, and it has become the sharp end of the spear in the climate fight,” says Adams. “Fracked gas is dirty. We have something to rally around, and I give a big thanks to celebrities like my friends Debra and Mark. And there are many more…”

More HYDRAULIC FRACTURING News
If you watch TV talk shows, you have likely seen Jimmy Kimmel, Alec Baldwin and a host of other celebrities speaking out publicly against fracking. Adams says that because of the awareness generated and work done at the grass roots level, the majority of New Yorkers are opposed to fracking. But there is more work to be done.

“About 40 percent of New Yorkers don’t understand the ramifications of fracking,” says Adams. “And some people could make a lot of money from the richest industry the world has ever known. We have a lot of poverty here so there is an appeal to get rich quick by signing a piece of paper [leasing your land]. And the oil and gas industry has spent 75 million dollars lobbying and marketing for hydraulic fracking. Even though there is a fracking moratorium in New York, we must keep fighting against fracking.”