There may be more hydraulic fracking sites in Pennsylvania or West Virginia than California, but Californians face another threat: oil and gas companies are fracking just offshore California’s coast. 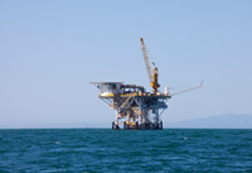 The oil and gas industry has fracked at least a dozen times in the past three years in state waters near Long Beach, according to the California Coastal Commission, which it has recently discovered. Industry documents and state records indicate dangerous substances, including 2-Butoxyethanol and other cancer-causing chemicals are being used - and dumped - in the process.

It would seem that environmental officials have turned a blind eye to California fracking contamination. In the wake of an investigation by NBC Bay Area’s Investigative Unit (March 1, 2012), the Center for Biological Diversity in April 2012 officially notified both California’s Bureau of Land Management and the US Department of the Interior of 60-day notice of intent to sue over fracking. In its scathing report, NBC discovered that California and state regulators were doing nothing to more closely monitor and regulate fracking. According to NBC Bay Area, regulators do not know how, when, what or where fracking chemicals are used and disposed of.

Meanwhile, on the ground, a new law, which will take effect in January 2014, will require drilling companies to disclose the chemicals used and acquire permits before they use hydraulic fracturing. Governor Jerry Brown signed the bill into law last month, adding that drilling companies will also need to test groundwater and notify neighboring landowners before drilling - rules and regulations intended to give the industry a framework for energy exploration in the Monterey Shale.

Furthermore, the Governor also signed a bill that will increase the bonding amounts oil and gas drillers must post in case a well is abandoned or an operator is unable to pay for environmental damage. But nothing has been said about the cost of fracking fluid dumped into California coastal waters: fluid containing chemicals known to cause cancer that could find its way into areas rich with marine life; areas such as the Santa Barbara Channel that is home to the world’s densest summer population of blue whales. Not to mention the seafood we consume that inhabit these waters.

More HYDRAULIC FRACTURING News
How could the California Coastal Commission not know the danger of offshore fracking? The Commission says it does not even know how much fracking has occurred in California waters. It attempts to address that question in this YouTube Fracking video clip.

What the state agency doesn’t know, it would seem the federal agencies don’t tell them. The Commission has been told, however, that 12 individual wells were approved in recent years. And those federal agencies that oversee oil production are relying on outdated environmental analyses that don’t take into account dangerous new hydro-fracking techniques. Federal officials say they do not know how often fracking has occurred in California’s coastal waters. At this point they don’t even know if there is a difference between onshore and offshore fracking.

Posted by
BAS
on October 16, 2013
"It would seem that environmental officials have turned a blind eye to California fracking contamination" This statement isn't unique to CA. Unfortunately wherever Fracking is taking place for natural gas there have been extreme cases of water, air and soil contamination. Much of the water contamination in PA is irreversible leaving people without safe water (Hundreds of cases reported) and land value has plummeted because, who can sell their property when there is no water? People are ill, all suffering the same symptoms and livestock is sick and dying. This is the O&G industry which is controlling the worlds economy so I can see why the EPA has been told to "turn a blind eye" But if people don't wake up and start fighting back against this industry, the next thing we will be at war for is safe potable water. No matter how many jobs and energy independence is touted by this toxic industry, we can't drink money or gas! Wake up people, watch the documentaries Gasland 1 & 2 to see what is really going on in this country regarding oil and gas.