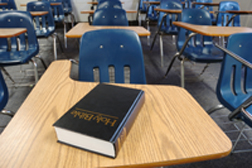 The situation, according to The Cincinnati Enquirer (6/4/13), was that a teacher at a Roman Catholic school was fired after she used artificial insemination to become pregnant. The teacher, who was not married when she became pregnant, filed a lawsuit against the Roman Catholic Archdiocese of Cincinnati, alleging she was discriminated against, in violation of state and federal lawsuit. Both being pregnant while single and using artificial insemination to become pregnant are violations of Catholic teachings.

The archdiocese contended that as a teacher with the school, the plaintiff knew that she was expected to live under Catholic teachings, but the teacher argued that she was not responsible for teaching religion and therefore not a ministerial employee. Furthermore, she said that because she is not Catholic, she did not know that artificial insemination violated the Catholic Church. The archdiocese, however, argued that the plaintiff’s actions, combined with her same-sex relationship, meant that she violated her contract.

More OHIO EMPLOYMENT LAW News
Meanwhile, the US Department of Labor filed a lawsuit against a business that allegedly owes back pay to gas station employees. According to a news release from the Department of Labor (6/19/13), the company violated minimum wage and overtime pay rules in how it paid employees. Among the violations were not paying employees for work performed before and after shifts, not paying overtime at the required rate and forcing employers to make up shortages in cash, either by working additional hours for no pay or by paying the shortages back.

“We are concerned about the prevalence of labor violations among gas stations, particularly those employing low-wage workers, who are often unaware of their rights and vulnerable to disparate treatment,” said George Victory, director of the Wage and Hour Division’s Columbus office.

Eighty employees at 12 gas stations in Ohio are affected by the lawsuit.