Praise the Lord and pass the peas, please. As for the alleged Ohio Employment Law labor violations, well…we’ll give that to God and trust Him to take care of it all. 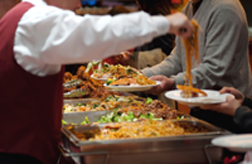 It seems there is more to televangelist Ernest Angley than fire and brimstone. Cathedral Buffet Inc. is an Ohio-based enterprise under the Angley banner that markets the Cathedral Buffet and Banquet Center as an excellent resource for business groups to hold large meetings. However, a recent lawsuit suggests that Cathedral Buffet has dropped the ball when it comes to upholding Ohio Labor Laws and other labor statutes under the Fair Labor Standards Act (FLSA).

The lawsuit was filed last month by the US Department of Labor (DOL). Amongst the allegations of unfair practices and affronts to Ohio Employment statutes and violations against FLSA, are claims that some workers were not paid minimum wage. Others were incorrectly classified in order to avoid paying overtime, together with claims of “oppressive child labor” involving minors.


“Such employment constitutes oppressive child labors as defined in Section 3(1) of the Act,” the complaint reads.

More OHIO EMPLOYMENT LAW News
The televangelist is described in the complaint as someone who actively supervised the day-to-day operations of the facility in relation to the employees who worked there.

In its complaint, the DOL holds that Cathedral Buffet should be found liable for the unpaid wage and overtime compensation due its employees, and seeks liquidated damages equal to the unpaid compensation, amongst other claims.

The official website for Cathedral Buffet promotes itself as “one of northeast Ohio’s largest buffet and banquet centers. Guests can come expecting fine dining in a relaxing atmosphere.”

The Ohio State Employment lawsuit is Perez v. Cathedral Buffet Inc. et al., Case No. 5:15-cv-01577, in the US District Court for the Northern District of Ohio.