Since undergoing abdominal mesh surgery four years ago, Dale has experienced more pain than he did before the mesh was used to repair a hernia. “I get severe pain in the area of my hernia repair and sometimes a burning feeling but I never knew what was causing it, and neither did my doctor,” he says. These symptoms and more are similar to other abdominal mesh victims who needed revision surgery to remove it—or some of it. 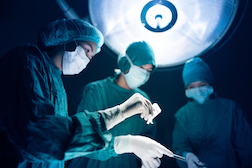 Dale, age 59, has an appointment to see another surgeon, perhaps someone who is able to remove the mesh, if that is necessary. “I’m always running a low-grade fever and my blood work shows that I have an infection in my body,” Dale says. “I’ve been healthy all my life and thought this hernia would just be a minor setback. Instead it’s been a life-changer, to my detriment.”

While Dale is hopeful that these side effects are indeed caused by the mesh and will clear up once it is removed, sometimes it’s not that simple. Lydia has undergone four surgeries to have a large piece of mesh removed. It seems that the larger the mesh implant, the more complicated it is to remove. “My surgeon did laparoscopic surgery and found pieces of the mesh wrapped around my bowel and intestines. After going back in three times, there are still bits of mesh that he can’t get at,” she says. “But it took me about two years of complaining, both to my GP and the surgeon, to even get him to go back in and look for it.”

“To make matters worse I’ve got another hernia so I’ve having more knitting starting again,” Lydia says, laughing. “If I don’t try to make light of this situation I’ll sink into a depression and that’ll just make my situation worse.”

Both Lydia and Dale know about hernia mesh recalls and the recent news from the Canadian Hernia Society that says up to 20 percent of hernia recipients are left with pain.  Dr. John Morrison, president of the society, told CTV News (April 2017) that hernia mesh may be used too often and in some cases the mesh may not be required. Further, he is concerned that this plastic mesh is being used in almost all hernia repairs, and some of the products have not received proper clinical trials or research before entering the market. In other words, they were approved by the 501(k) fast track process.

More SURGICAL MESH News
Morrison advises patients like Dale and Lydia to find another physician or a hernia surgeon if the pain persists longer than three months. And for patients scheduled for hernia surgery, “ask their surgeon if they're going to be using mesh, ask them exactly what type of hernia they have, why the mesh is being used… prior to the operation, a patient should read on the internet the effects of the mesh being used on the hernia they're having repaired. And he also told CTV news that, “an educated patient is the number one thing that will solve this problem.” You can find online figures from Health Canada showing some 12 brands of hernia mesh that have been recalled or removed from the Canadian market since 2000, including ETHICON PHYSIOMESH Flexible Composite.

Posted by
Tanya Hiller-Brown
on August 12, 2017
l had surgery in 2011-find out lm mess up 2013-2014 by another doctor who has been force to retire because he told me and put in my medical record..l had one doctor who told me I had something else to cover up their mistakes...l need additional surgery now l have a mass the size of a grapefruit.They same doctors whom black Balling me tell me to take this out and lt will work but l know lts just more cover up l need a lawyer who going to help me...