Monica did everything possible to avoid surgery, and with good reason. Since back surgery using Medtronic Infuse bone graft almost two years ago, she has had nothing but problems. And now that Monica discovered her surgeon used Medtronic off-label, she is looking into a Medtronic lawsuit. 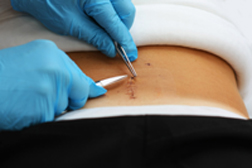 Monica (not her real name) spent thousands of dollars and many hours with the chiropractor and physiotherapist before her lower back pain became unbearable - the pain was shooting down her legs from the L4 and L5, due to degenerative disc disease. She found a surgeon with a solid reputation, or so she thought, and underwent an eight-hour surgery using the Infuse bone graft.

“After three months I returned to work,” says Monica. “The pain was gone so in that regard I thought the surgery was successful, but there was still some weakness in my leg and I could feel a shooting pain a few times a day, which I could live with. But my mobility was affected - and that was something new. I couldn’t bend down to reach the bottom shelf of my closet; I could only bend to a certain point and couldn’t go any further.”

Monica hadn’t been referred to physical therapy so instead she went swimming at the YWCA and she walked a lot. This wasn’t easy having two children and a full-time job but she went religiously every day. But by Christmas Eve the back pain had worsened. She had more x-rays and went back to the surgeon for the one-year follow-up.

“He studied the x-ray and said everything was fine,” says Monica. “I asked him why I had so much pain if everything was fine. He just told me to continue exercising. By the fall of 2013, I called him again - something was very wrong. I insisted on getting a CAT Scan and an MRI but couldn’t get the results from my surgeon. He conveniently was unavailable for several months, even though my husband kept calling.

“Out of desperation I went to a pain management doctor, on my doctor’s advice. He gave me injections and read the CAT Scan and MRI reports - that is how we found out the bones hadn’t fused. When my husband finally reached the surgeon, he admitted it hadn’t fused and I needed revision surgery.

“We were furious. And it gets worse. My husband called the surgeon again. ‘Also the results indicate further damage to lower level,’ said my husband. ‘I don’t see that,’ said the surgeon.

“When I was on winter break I couldn’t take the pain anymore and got a second opinion. This surgeon was appalled. ‘In all my years of practice I can tell you that this type of back surgery you had was way too radical; I have only seen that surgery performed twice, when absolutely necessary,’ he said, adding that my surgery should have only taken two hours. He then showed me the device he uses, and it isn’t Medtronic.”

Monica wants to sue the surgeon for medical malpractice and she has also filed a claim against Medtronic.

In 2002, the FDA approved Medtronic for limited use. Monica had fusion of L4 and L5, which would have been off-label. Hundreds of Medtronic lawsuits have been filed, all alleging off-label marketing of the Infuse device. Almost 1,000 more cases are in the investigation stages.

More MEDTRONIC INFUSE BONE GRAFT News
In November 2013, Tracy Olson, a Texas resident, filed a product liability claim against Medtronic claiming that the Infuse bone graft surgery left her with severe injuries and economic losses. The lawsuit, filed in the U.S. District Court, Southern District of Texas (Corpus Christi) alleges that the Infuse bone graft failed on multiple levels and that fusion had failed to occur on the L4 and L5 vertebrae. Olson is suing Medtronic for $2 million in damages.

In another Medtronic lawsuit, the plaintiff is suing both Medtronic and her surgeon, arguing that she was not told until after the procedure that the Medtronic device was used in ways not intended on the label; in other words the procedure was performed “off-label” and not approved by the FDA.

Posted by
Joyce
on May 16, 2016
In July 2013 I had back surgery L4&L5. Was told by surgeon that it was an unavoidable surgery, as I'd tried everything else to alleviate pain. During surgery I felt like something dropped on my left knee. I saw white spots before my eyes and pain was excruciating! I awoke to !y left leg swollen grotesquely from my foot to my groin. In recovery I asked what happened to my leg, Dr told me nothing happened in or ..the meds made me think this. I screamed my leg is killing me, he said it was the pump that prevents blood clots that was uncomfortable.... My family could see the leg was enormous. Dr. Da d sometimes this happens during surgery and it would go away in two days! To make a long story short Medtronic cafe and bone growth protein had been used in my back off label. I was discharged from hospital against my and gpfamilies wishes two days following surgery. I was told by them there was no medical reason to keep me. They refused to do MRI cscan or x-ray if my leg. I was home two days when I was found near death in my bed at home!
Posted by
debra
on August 24, 2014
in feb 2001 i went to a dr.in kentucky to get help with neck and low back pain,i saw this dr once and he said that i was going to need surgery on both.i was in so much pain,headaches.i was sceduled for neck surgery in feb 2001.i didnt see the dr.again til the time i was been ready for surgery,he exsplained to me that he was going to take out 2 disk in my neck and fuse it togather,i didnt know anything was going to be replaceing were he was taking out.to make a long story short i have not for all these years recovered from this,the pain is worse and i have to live with this,in sept 2001 i also was told from the same dr that the problem i was haveing with my neck would be better after a year,and that i was needing to go ahead and have back surgery to repair it,on sept i went in for surgery on my back,at that time i had blood work,exrays and i was hooked up to so many wires i couldnt move,as i waited for the dr to come in and talk to me,all i was told from him that he was going to take a bone from my hip and fuse it to help my back,i again was in so much pain til i was willng to see if it would help me.there was a nurse there and she told me that i shouldnt do this because it wasnt aproved for the surgery and seem to be angry,i started asking question and was told it was too late to change my mind,and the only problem was that this wasnt fda approved,i didnt understand what that ment than,and was already drugged and had been hooked up to many wires til i couldnt move,i walked in the hospital with a limp and was wheeled out,for 9 months i couldnt walk,i couldnt swollow food or drink without getting choked or strangled,i made a apointment to see this dr after surgery and complained to him about this and he stated that he done me great deal and i could see someone else if i wonted to,i couldnt for my insurance wouldnt let me,so i suffered,after a year i wasnt good i was doing much worse,had lost 60 pounds couldnt eat,couldnt walk and when i got to his office i was told that he no longer pratice there and had left the country,i couldnt understand,got no right answers and than i went to get my medical reports and was told that they would be sent to me.on his report stated that i had inproved and he was releaseing me,but the fact was i couldnt walk and i had lost so much weight til i was dieing,i have suffred all these years to know that this dr has not only cheated me but so many here in my area and has goton away with this,the truth was that he was preforming surgery on people that he wasnt to do,placeing this equpment in our body that he had gotton off the internet and wasnt fda aproved,and was fired and run out of town,i have been trying to find him just to ask him why would he do a young woman of 38 years old that way just for money and the fun of practice putting this inside our body.after all these years i have put his name in the computer to find him and i was right he is doing a pratice in the artics and the same surgeries,i might have stated to much on here but i am victum of a crime from the dr.that done the surgery and the buisness medtronic that had paid him so much money to preform these surgeries on us people to see how this would do,i dont know about any of you but i was 38 and i am now 51 and i know with age i should have been better by now but worse is my statement.if i would have been told that this wasnt aproved by the state,government or the hospital,i sure wouldnt had this done,but i wasnt told til 5 min before my back surgery.,and to find out a year or so later that it wasnt and he was fired,just wasnt right,thank you for lissioning to me,thank you doctor for taking my life instead of helping me.