Legal malpractice law exists to serve and protect legal clients from poor advice, substandard representation, unprofessional conduct or just plain dishonesty. That said, a legal malpractice lawsuit can go either way. A recent decision by the Virginia Supreme Court concluded that a testamentary beneficiary couldn't sue an attorney for allegedly giving bad advice to the estate. 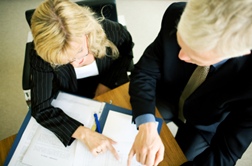 According to the 4/23/10 issue of Lawyers Weekly USA, the beneficiary of an estate sued her attorney with regard to advice given over the probate of her mother's estate. The beneficiary, who was not named in the report, was eventually removed as executor and claimed she suffered monetary loss as a result. She also blamed the lawyer's alleged malpractice.

The beneficiary argued that a preexisting legal malpractice action belonging to the estate was inherited by said beneficiary and that she qualified as a beneficial owner of the claim under a state statute that allows for the assignment of a "bond, note or writing or other chose n action."

"Virginia has adopted the strict privity doctrine in legal malpractice cases; as a threshold requirement, a plaintiff must demonstrate the existence of an attorney-client relationship," the court said. "[The attorney] was retained to represent the estate, not [the plaintiff]. In this case, no such relationship existed between [the plaintiff] and [the attorney].

"Although [the statute] permits the 'beneficial owner of any ... chose in action' to maintain in her own name any action the original contracting party might have brought, the common law has long provided that this particular chose in action requires the existence of an attorney-client relationship as a threshold element."

If you have suffered losses in this case, please send your complaint to a lawyer who will review your possible [Legal Malpractice Lawsuit] at no cost or obligation.
Request Legal Help Now