Unraveling the Mystery of Heparin-Related Death

In an earlier interview, Professor Ram Sasisekharan of MIT, who led an international team of investigators, said that their results provide a potential link between the presence of chemical contaminant in heparin and the clinical symptoms observed in affected patients. And importantly, a simple bioassay could help protect the global supply chain of heparin, by screening heparin lots for the presence of polysulfated contaminants that may have unintended pharmacological consequences, he said. 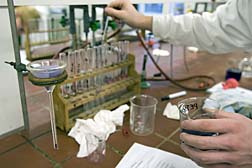 Dr Sasisieharan and colleagues reported their findings in full in the prestigious journals Nature Biotechnology, and the New England Journal of Medicine. The two inflammatory pathways that are activated initiate blood clotting and dilation of the blood vessels, and produce anaphylactic toxins. When the pathway associated with blood clotting is activated, it can result in a life-threatening decrease in blood pressure--hence the reduced heart rate many people describe. And when the pathway that produces anaphylactic toxins is activated it sets off serious allergic reactions. It's important to note that uncontaminated heparin does not cause these reactions and has been used safely for decades.

Heparin consists of one long, complex chain of repeating sugar molecules. The contaminant in the heparin cannot be detected by the traditional screening tests. But Sasisekharan and colleagues have developed new technologies that were able to detect the contaminant--which is derived from animal cartilage.

Dr Sasisekharan, who is the Underwood Prescott Professor of Biological Engineering and Health Sciences and Technology at MIT, and lead investigator of the studies, said that their findings provide the scientific groundwork for critical improvements in screening practices that can now be applied to monitor heparin, thus ensuring patient safety.

More News
Jeremy M. Berg, director of the National Institute of General Medical Science, which sponsored the research, commented that in addition to being vital for public health, identifying the recent impurity in heparin was a chemical triumph. "The research team accomplished this difficult task by using a unique combination of scientific techniques that might in the future be used to detect other impurities in pharmaceutical materials."

Reports of tainted heparin first surfaced in November 2007, and since that time dozens of tainted heparin-related incidents have been reported in the United States alone. In February Baxter recalled its heparin, following reports of people dying after having received the tainted drug. It was subsequently confirmed that the product causing the problems came from factories in China. To-date, contaminated lots of heparin have been found in 10 countries. The question that remains to be answered is how the contaminant got into the heparin during the manufacturing process.