In May 2009, Cathy's mentally disabled daughter was rushed to the hospital with severe abdominal pain and the doctors found blood clots. "Right away she was given Heparin IV and she started bleeding outwards—there was blood everywhere," says Cathy. "Then she had a heparin allergic reaction—her abdomen was severely swollen and covered in a scarlet rash. 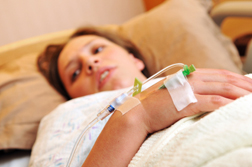 "They stopped the heparin immediately and Lisa, my daughter, was discharged the next day, but the rash and swelling never went away. I took her to another hospital and the doctors told me that she had lost two units of blood so she had to be given another two units to replace the blood lost, and a catheter was put into her right groin.

"I saw Lisa later that day and while I was there, a nurse injected her with Heparin, even though 'Do not give heparin' was on my daughter's chart. Of course I was furious and demanded to speak with her doctor, who just said that heparin injection was different than heparin IV.

"It gets much worse. That same day Lisa fell in the hospital; she had a stroke (the doctor told me she suffered a stroke and it is on her medical record) and broke her knee bone. I phoned the CEO of the hospital and complained. He called the orthopedic team and booked surgery—immediately. When Lisa came out of surgery she was in ICU: her abdominal cavity and bowels were so swollen they were going to do a colectomy—she was given IV heparin again, this time before surgery.

More HEPARIN News
"I told them it wasn't necessary to do the colectomy because it was just a reaction to the heparin. The swelling went down the next day and she was transferred to a nursing home for several months before she could come home.

"Lisa is 37 years old and she has hypertension but it was always under control. I believe the heparin triggered the stroke. I spoke with an attorney here in Michigan. He said that he would take her case but so much happened to her that it is so complicated, and because of the laws in Michigan, he can't handle it, so he advised me to contact an experienced heparin attorney.

"Everyone was trying to ignore the fact that she was given Heparin and I am very angry that nobody takes responsibility for this error—someone has to do something about heparin reactions—I can't help but think that Lisa suffered because of heparin contamination."

If you or a loved one have suffered losses in this case, please click the link below and your complaint will be sent to a drugs & medical lawyer who may evaluate your Heparin claim at no cost or obligation.
Request Legal Help Now

Posted by
Andrea Beger
on November 16, 2012
Cathy, let me first off say "I'm truly so sorry for everything your daughter & family has been through"!! My name is andrea & I'm 33yrs old, I married the man of my dreams 5 yrs ago, his name is william & he's 49. William was a very physical fit man that went to the gym & work everyday. On september 29, 2011 I had to take my husband to the ER for a bad pain he was having in his calf. To make this short, he had a blood clot in his calf due to having heparin back in august 2011. Hospital started a IV of heparin, doctors went in & got the 9 inch bloodclot & his artery looked beautifully, that's what it states on his medical paperwork. Well within 36 hours that same leg, same spot clogged again with another bloodclot, this time doctors cut open his right leg from groin to ankle & removed a nice artery & placed it in his left leg, by the next day it was clogged again, his incisions were turning black, cold, severe pain, etc.. He suffered for about 4 days in the hospital with all that pain that NO PAIN MEDICINE would ease the pain at all so on october 12,2011 doctors took my husbands leg, BKA. During his amputation he suffered a heart attack which doctors didn't no till next day, while doctors had him in the cath lab looking at his heart william coded blue, they brought him back by the grace of god. 2 days before he was released a blood doctor came into his room & said "william you have HIT (HEPARIN INDUCED THROMBOCYTOPENIA) he told us that the hospital contacted him to late cause if they would have contacted blood doctor a few days before the blood doctor could of saved his leg. Due to all this our lives have changed dramatically & william has not gotten any better, he just had 2 valves repaired in his heart due to having HIT. If you ever wanna talk I'm here for you sweetie, ANYTIME... SINCERELY YOURS, ANDREA & WILLIAM