Frustration and Tragedy from Heparin

Deborah, a registered nurse, has taken courses on Heparin. When her cousin had an allergic reaction to the drug, Deborah immediately suspected it was due to Heparin contamination.

"My cousin was admitted to the Orlando Hospital in Florida over a year ago with a DVT (deep vein thrombosis) clot behind her knee," says Deborah, "and she was given Heparin to help dissolve the clot. But not long afterward she developed an allergic reaction to the anticoagulant [blood thinner]; her hands and feet turned purple, apparently because the micro-vessels in her extremities shut down. That happened a few days after they admitted her; they stopped the Heparin but the damage had already been done. 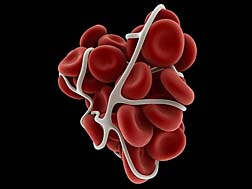 "The doctors told me they put her on an alternative medication and they confirmed that she had suffered an allergic reaction. And they gave her a tremendous amount of antibiotics because she was septic, which meant the infection had gone throughout her body. At this point I wondered, because of all I had heard about contamintated Heparin, if that was the reason. It is just too much of a coincidence.

The next time I visited, a few days later (I had to drive five hours to the hospital from home) her hands and feet were black. My cousin passed away on May 30th, 2007. I was her only relative: she was an only child and both her parents were dead.

I had to go through her personal belongings and found medical papers in her files. She'd been admitted to hospital a year before and given Heparin when she had another blood clot, but she recovered and was discharged. I also found out that she was prescribed coumadin but she never took it—I found the prescription. If she had taken coumadin, it may not have prevented her from getting another blood clot. People still get blood clots on this blood thinnner; I know about this drug because I work in a coumadin clinic, run by our hospital.

We talk about Heparin all the time at work. Right now, one of the prime considerations this year for the Regulatory Commission for Hospitals is the education of patients about Heparin because of some recent adverse events, and the education of the health providers regarding the importance of reading bottles and not overdosing the patient."

More HEPARIN News
(On July 10, two infants at a Corpus Christi hospital in Texas died after they were given an overdose of Heparin. Texas authorities are investigating the deaths and the parents have hired an attorney. A total of 17 babies were overdosed: one is in critical condition and the others are in stable condition. They were given a dose that could have been 100 times stronger than normal.)

"Unfortunately, I don't know much about the contaminated heparin except for what I have read," says Deborah. " And I am frustrated because you hear about all these situations and it continues to happen yet nothing is being done; I can't seek legal help because she wasn't my immediate family, but if she was…

I know there has been some talk of getting the manufacturer to change the label on the Heparin bottle: if and when that will take place, who knows. I certainly hope lawsuits will prevail, especially because it has killed children and now those twins in Texas just died."