Husband Recovering until Given Heparin

"Heparin was given to my husband at the hospital," says Betty Soames. "He was supposed to have a coloscopy but they didn't get to that--we had no idea he was going to die. My husband and two nurses told me that he was getting shots of Heparin."

But Betty Soames (not her real name pending a lawsuit) was never was told why he was given it, in fact she wasn't told a whole lot. 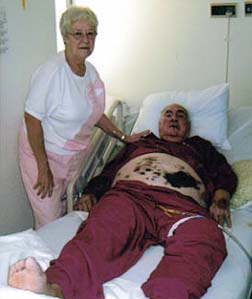 "I took my husband, Troy, to the VA hospital August 12, 2007 because he had fallen down a few times and we hoped they could figure out the problem. It happened from time to time. He was diabetic and on thyroid medicine but it was under control.

After the colposcopy, the plan was to put him in a nursing home just for a few weeks until he was strong enough to get home. He wanted to be at home and I thought maybe we could get some home care. But then I got a call from the VA hospital and he was getting transferred. I don't know why but it was an emergency. They asked me where I wanted him to be taken so I chose Morgantown University hospital because it was close and a good one—they train students there.

Troy was only there five or six days before he died. They were still planning to do the colposcopy on Monday but he died on Sunday. He was fine at the VA but something happened and he deteriorated real fast. They don't explain a lot to you. But I even saw the nurse give him a shot. I know Heparin is a blood thinner but I didn't know that he had blood clots. It is sad how little they tell the family. I don't blame the medical staff: They have their hands full and a lot of the time they are working short-handed.

I sent a copy of Troy's death certificate to the lawyer and a picture of his stomach—it was black and blue, where he had the Heparin shots. My husband knew what was going on—he was very alert, right up until the end.

Nobody expected him to die. Not until the last day did his doctor indicate anything.

On the last day I was watching his chart: everything seemed too low including his blood pressure. We knew it was serious. They gave us a choice: put him on a machine and take him downstairs or unhook everything. They asked me what to do. 'Troy is still alert, he can make his own decision,' I said.

Troy said, 'Unhook everything.' He'd gone through enough—he looked like he had been in a torture chamber from all the places they were taking blood.

More News
The doctors went out in the hall and talked about it. We went over our choices all over again. 'Let nature take its course,' Troy said.And they did. Six hours later he passed away. It was terrible but he didn't have to suffer. We were all together and he went calmly.

Then I saw the red flag: When I saw something about Heparin on TV two weeks after Troy passed away, I thought that could be the reason he died. I went online and searched for a lawyer and got a call back from someone through LawyersandSettlements.

I gave my lawyer permission to get all the medical reports from the VA and University hospitals. They will be able to take it from here. My husband's family is long-lived; he would have been with us for many more years if this didn't happen—if he wasn't given Heparin."