Did Contaminated Heparin Cause Father's Death?

"My father had a stroke in 2002 and during the next four and-a-half years, he was given a lot of Heparin, says Paul R, "During that time, he had a number of urinary and blood infections (including several of unknown origin) that he picked up in hospital and now that I read about contaminated heparin I am wondering if that caused my dad's death."

"Most of my dad's infections began at home, not in a hospital. He did develop blood infections one or two times during hospital stays, but the large majority happened at home," Paul adds. 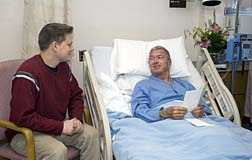 The massive stroke rendered Paul's father paralyzed. He spent about four or five weeks in the hospital and another few weeks at stroke rehabilitation. After that, Paul and his brother decided to take care of him full-time rather than put their father in a nursing home. "During that time he had a PIC line inserted in his arm and we gave him various medications at home," says Paul. "As instructed, I flushed dad's PIC line twice a day with heparin. As he had a PIC line continuously in his arm about nine out of every 12 months from early 2003 until October of 2006, he got a lot of heparin during that time period! When dad was in hospital, his PIC line and any other IV lines that were inserted were flushed primarily with saline: only occasionally would heparin be used in a hospital setting.

During the time we looked after my dad at home, we had to take him back to the hospital about 12 times due to infections. The doctor told us that, if he displayed certain symptoms, we had to take him to ER immediately.Anytime, dad ran a temperature above 101.5 (F), as his doctor ordered, we took him to the ER for testing.

In February of 2005, we had to take my father back to the hospital for five weeks. He had an infection "of unknown origin" again. He had a high fever and highly elevated white blood cell count. And we had to watch out for dehydration. In 2005 the criteria for discharge in most hospitals was to have three days free of any symptoms. He would have a day when the fever was down then next day it would spike. He would have all the normal vital signs then bam!

In early January of 2005, dad went into hospital again for an infection, this time for five weeks, his discharge taking place in mid February.

Dad died in October, 2006 and he received the flushes until the day he died. We would have gotten the last Heparin batches around August or September - a medical supply service would drop off the batches to our home. I still have some of the Heparin batches that we used at home—the single batches.

We were getting dad's heparin in either 60 day or 90 day batches. Thus, the last batch that we got would have been delivered to us from July to early October of 2006.

More News
What else could explain all his infections? The doctors provided no answer. I have his medical records from the main hospital. There are literally hundreds of pages in doctors' handwriting so they are hard to decipher but I am sure the lawyers will be able to sift through it all and determine which Heparin batches he was given.

To discover the specifics of the origins of my dad's heparin batches from 2003 through mid 2006, the lawyers will have to get this information from the hospital home care services that supplied the heparin to us.

I don't know what the lawyers have discovered regarding clear medical links between heparin and these infections. I want to find out if my dad was given contaminated Heparin and if so, take action against those people responsible for this travesty.