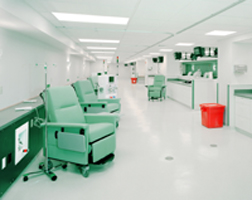 But in a petition filed on January 3, 2013, with the United States Judicial Panel on Multi District Ligation, Fresenius’s lawyers wrote, “The plaintiff’s claims will fail on their merits because the plaintiffs cannot show that Fresenius’s products are unreasonably dangerous or that Fresenius failed to provide adequate warnings and instructions to the intermediaries who used GranuFlo and NaturaLyte to treat dialysis patients.”

“That’s what we would expect them to say at this point,” says lawyer Ben Stewart from Ben Stewart Law in Riverview, Florida. Stewart’s firm represents a number of dialysis patients and families involved in the suits. “We see things differently, much differently. These negative reactions happened when the patients were actually hooked up to the dialysis machines and shortly after.”

More GRANUFLO AND NATURALLYTE News
In November 2011, Fresenius’s chief medical officer sent a memo to doctors and staff at all the Fresenius clinics describing what he called “troubling findings.” According to the memo, 941 patients had suffered cardiac arrest while at the clinics in 2010. The patients all had extraordinary high levels of bicarbonate in their systems that put them at about six times the risk of cardiac arrest when compared to patients with normal levels of bicarbonate.

Although Fresenius told its doctors, staff and clinics it apparently saw no reason at that time to tell the public, it is estimated that about 125,000 dialysis patients were being exposed to GranuFlo or NaturaLyte at other non-Fresenius clinics.

“Look, if you tell someone we are going to use this chemical on you and it might be harmful and you choose to accept that risk, there’s no harm - no foul,” says Stewart. “But that’s not what happened. There are probably lots of people out there who were injured by this that we have not heard from yet.”

READ ABOUT GRANUFLO AND NATURALLYTE LAWSUITS

Posted by
Ellen Daigle
on October 5, 2016
your comment is from 2013 and i do not see any replies. my spouse was on dialysis in 2005 through 2008 when he passed away and now i am involved in a mass tort lawsuit against the chemical company. but I would like to know exactly what your
you have made your claim based on what? Kidneys shutdown, what is then possible to continue to live?
Posted by
David Moskowitz MD FACP
on January 30, 2013
In 2002, I published that 90% of dialysis could be prevented. Nobody in healthcare has done a thing about it. For example, nobody has come forward to talk to any reporter, so news of my paper remains suppressed. Even Medicare, the Single Payer for dialysis, hasn't said a word about my paper. It seems people's jobs are more important than patients' lives. Contact me if you'd like to mount a class-action lawsuit against Medicare and the rest of the healthcare industry. Absolutely nobody is blameless in this case.