On August 1, attorney Bill Marler of Marler Clark filed the first lawsuit stemming from the Salmonella St. Paul outbreak that was originally blamed on tomatoes and has now been traced to jalapeno peppers. So far the outbreak has sickened at least 1,319 people and the investigation is ongoing. The complaint was filed on behalf of Brian Grubbs against Wal-Mart and for the time being, an unknown supplier. 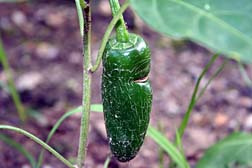 "Mr. Grubbs became sick after eating jalapenos purchased from Wal-Mart," says Marler, "and it was the only thing he ate different from his wife." Fortunately, Mrs. Grubbs had the wherewithal to contact the local health department and insisted on getting the peppers tested. "She really pestered them to get the test done and now it has become a crucial piece of evidence," says Marler.

Marler explains that health departments are inundated with requests to test food and most of the time those requests are unfounded, mainly because people think the food that sickened them was the last food they ate. In this case, Marler says they got lucky: The Grubbs family still had some of the jalapenos that sickened Mr. Grubbs.

On July 3 Mr. Grubbs became nauseous and suffered chills and diarrhea. His condition worsened over the next few days, to the point where he couldn't walk without help. Fortunately, his wife drove Mr. Grubbs to hospital and was treated before he went into kidney failure due to severe dehydration. " A stool sample was taken that proved a genetic match to Salmonella St. Paul and the pepper—it is airtight evidence," says Marler.

More SALMONELLA News
As for the jalapeno pepper being the smoking gun, Marler says it is more complex—the FDA and the CDC also found Serrano peppers and water in Mexico contaminated with the same strain of Salmonella. "What this means is that at some point in time, there is a connection between water and peppers and possibly tomatoes," he says. "The FDA and the CDC haven't yet given tomatoes a clean bill of health and tomatoes might explain part of the outbreak but I suspect there has been cross-contamination between them and possibly other products that would go into Mexican dishes, such as cilantro."

Does the trail get weaker as time goes on? Marler says it gets better: "Health officials are able to trace back 1,319 sickened individuals and find some form of a common denominator," Marler explains, "and hopefully in the litigation process it will be helpful to find that thread."
READ ABOUT SALMONELLA LAWSUITS