Abdominal Mesh Complaints Rise in Canada, MDL Established in the US

A Nova Scotia man is the latest Canadian to report complications with surgical abdominal mesh, and will likely join hundreds of other Canadian hernia surgery patients in a class action lawsuit against Ethicon, a subsidiary of Johnson & Johnson, the makers of Physiomesh. 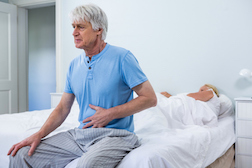 Eric Hagen, 86, along with many other Canadian hernia mesh patients claim that Ethicon’s Physiomesh is to blame for their chronic health and pain problems. Their lawsuit alleges that the surgical mesh had a design defect that causes the mesh to migrate, tear or contract while in the body. This type of abdominal mesh caused higher than average reoperation and recurrence rates in the patients that had surgery to implant the mesh product.

Abdominal mesh Lawsuits have been filed before the Physiomesh recall in May, 2016. In fact, complaints were lodged with Health Canada soon after Ethicon’s Physiomesh was introduced in 2010. Hagen received the abdominal mesh as part of a hernia repair in 2012. "The surgeon, she told me that she used the mesh," Hagen told CBC News, because at the time, "this is a new thing."

Physiomesh isn’t the first abdominal mesh to have created serious problems and subsequently recalled. A $300 million Canadian class action lawsuit was launched in 2010 over the Kugel mesh, which allegedly caused complications, including bowel perforations. The Kugel Mesh Patch was also “the new thing” back in 1996. By the time it was first recalled in 2005, thousands of people had been seriously injured by the surgical mesh.
Since 2000, 12 hernia mesh products have been recalled in Canada’s market. Patients suffered from infections and perforations with three deaths and 185 reports of serious injury as a result of hernia mesh. A Canadian surgeon, Dr. John Morrison, said that in some hernia surgeries the mesh isn’t even required but doctors use it anyway. Morrison’s practice includes the removal of mesh products which have shifted inside of the patient’s body and often has pierced their organs.

More ETHICON PHYSIOMESH SIDE EFFECTS News
If you are scheduled for hernia surgery, ask your doctor which type of hernia you have, if surgical mesh needs to be used and if so, which kind will be used. Research the options first, particularly the types of mesh that have caused complications.

Meanwhile, south of the border in Georgia, a new multidistrict litigation has been established for all federally-filed hernia mesh lawsuits involving Ethicon, Inc.’s Physiomesh. In a Transfer Order dated June 2, the U.S. Judicial Panel on Multidistrict Litigation (JPML) found that centralization of the federal Physiomesh docket “will serve the convenience of the parties and witnesses and promote the just and efficient conduct of this litigation.” Case MDL No. 2782
READ ABOUT ETHICON PHYSIOMESH SIDE EFFECTS LAWSUITS

If you or a loved one have suffered losses in this case, please click the link below and your complaint will be sent to a drugs & medical lawyer who may evaluate your Ethicon Physiomesh Side Effects claim at no cost or obligation.
Request Legal Help Now