People living in a Buffalo suburb had good reason to suspect they were being negatively affected by the Tonawanda Coke plant. "It has three big smoke stacks," says environmental law attorney Charles Cobb. "People who live around there sometimes talk about 'a bad day.' That's when the air is overwhelmed visually, combined with a noticeable smell from the plant." 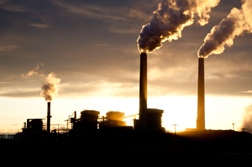 The plant, owned by J.D. Crane since 1978, burns coal at high temperatures to create blocks of carbon, or coke, used in the steel manufacturing process.

"The problem with burning coal is that it produces coke oven gases," says Cobb. "Ordinarily a plant will capture and recycle those gases. In this case, Tonawanda Coke is either not capturing those gases or doing it inefficiently. The result is highly toxic gases being released into the atmosphere."

The plant has been raked over the coals in recent months for a number of violations, but in October 2009 a New York State Department of Environmental Conservation study shocked residents into starting a class action. The study found airborne benzene present in concentrations up to 75 times higher than permitted in neighborhoods around the plant.

Residents of Tonawanda, represented by Charles Cobb from the firm of Collins & Brown, have filed a class action suit against the plant, owner J.D. Crane and environmental control manager Mark Kamholz. According to the materials filed, the defendants "breached their duty of care by failing to failing to properly deal with hazardous and toxics waste and emissions from the plant."

As many as 40,000 people live in the area. Not only are residents worried about their property values, but they are also are concerned about exposure to the well-known carcinogen benzene and the affect that may have on their health.

Although the Tonawanda plant has been in the area for close to 90 years, Cobb says people who lived there had no way to know the plant is was not meeting environmental guidelines until recently. "They didn't know what the conduct of that plant was," says Cobb. "If Tonawanda Coke was operating within the law, it shouldn't have been a problem. The point is that the plant wasn't operating within the law."

More ENVIRONMENT News
Cobb argues that the plant has stigmatized the neighborhoods and that residents will require an ongoing medical monitoring program because of the high risk of cancer associated with benzene.

Tonawanda Coke has yet to respond to the suit.

Charles Cobb is an associate attorney with Collins & Brown. Born and raised in Buffalo, New York, Cobb is a graduated from law at the State University of New York at Buffalo. His work is focused on construction site injuries and representing people in the community who need representation to get the justice they deserve.

Posted by
Patricia Davis
on April 6, 2014
I have suffered numerous immunological illnesses after years of working in various trucking companies surrounding Tonawanda Coke
Posted by
Evelyn K
on November 20, 2010
i do believe that my bronchial problems are related to the Tonawanda Coke and other problems. My neighbor also has COPD Mine has not been diagnosed that yet but it is only a matter of time I get upper respitory problems once or twice a year for the past 20 years.