The Simmons Firm, a national litigation firm known for handling complex toxic exposure cases, filed suit today on behalf of the Village of Roxana, IL, against Shell Oil Company, ConocoPhillips, and WRB Refining LP. The Village alleges damages stemming from carcinogenic chemicals released from the Wood River Oil Refinery. Releases have contaminated the groundwater, land and air of Roxana. The case has been filed in conjunction with Roxana Village Attorney James Schrempf. 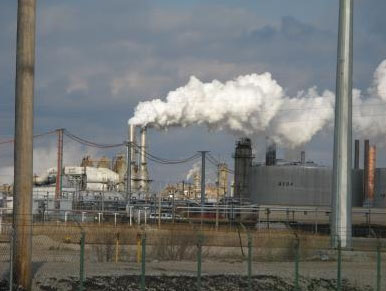 Benzene contamination on Village property measures in some places as high as 2.6 million percent of the allowable limits set by the Illinois Pollution Control Board, according to testing done by Shell’s contractor URS Corporation.

“Shell’s own testing and reports show that benzene and other toxic chemicals have spilled or leaked from the refinery onto the property of the Village of Roxana, contaminating the streets, alleys, rights-of-way, the ground water and, in particular, the Village’s Public Works Yard,” said Simmons Firm shareholder Derek Brandt, who leads the firm’s efforts on behalf of the Village.

The fugitive emissions are attributed to broken pipelines and the refinery itself, according to the complaint. Much of the contamination is underground, resulting in the contamination of groundwater, soil and the soil-gas vapors under Roxana. The underground contamination extends into several blocks of the Village’s residential area.
Testing was done in several alleys owned by the village. Results were positive for benzene contamination in the alleys from East Second to East Eighth streets. Excessive levels were detected at many locations, but contamination was the highest in the Village’s Public Works Yard, where it registered some 26,000 times (or 2.6 million percent of) the allowed limit at certain depths.

The complaint notes that from 1988 to 2010 the defendants themselves reported releasing into the air approximately 13.2 million pounds of toxic chemicals from the refinery, of which 3.8 million pounds was benzene. That, according to Brandt, would equate to “about 526,243 gallons or two Roxana-sized swimming pools of benzene.” Other dangerous chemicals released include ethylbenzene, toluene and n-hexane.

The Village alleges that the existing benzene contamination has damaged its own property and also damaged its tax base due to reduced property values of homes in the exposed area. It alleges trespass, public and private nuisance, unjust enrichment, and violation of the Illinois Water Pollutant Discharge Act.

Worldwide sales of benzene are expected to reach $52.6 billion in by 2018, according to Ceresana Research Institute. It is a natural part of crude oil and the most basic petrochemical. Because it is also a known carcinogenic chemical, its use as an additive in gasoline has become regulated. It also remains in use as an industrial solvent and a precursor to basic industrial chemicals.

About Simmons Browder Gianaris Angelides & Barnerd LLC
The Simmons Firm is a leading national law firm in complex litigation matters and has represented thousands of clients throughout the country on issues involving toxic exposure, consumer rights and public safety. The firm is dedicated to its clients and has pledged over $15 million to cancer research. Additionally, the firm focuses on intellectual property litigation, pharmaceutical injury litigation, and contingent fee commercial litigation.

Posted by
David McLaughlin
on November 30, 2015
I lived on first st in Roxana for 15 years had 5 wells by my house lost several dogs young and mysteriously how do I get compensation