Dr. Noni MacDonald, a Canadian pediatrician and member of an expert panel convened by Health Canada to study the sale and consumption of caffeinated energy drinks in 2010, is clear about what she believes should be done. 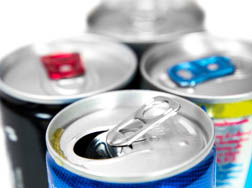 “Caffeine is a drug and these beverages contain a drug,” says Dr. MacDonald.
“In my view, these drinks should be pulled off the market until we have information from scientific studies that show us that these drinks are safe to consume,” she adds. “Right now, we do not have that information.”

Health Canada’s current data only goes as far as 2012; however, most observers believe it is likely additional adverse events related to the consumption of caffeinated energy drinks have very likely occurred in Canada over the last four years.

As a doctor who is concerned with the health of children and adolescents, Dr. MacDonald has some specific concerns about the consumption of these beverages by young people.

Researchers report that standard school hours do not work to the advantage of adolescents. “Now we are making it worse. If kids are drinking caffeinated drinks in the evening, teens either do not sleep enough or sleep well. The result is a sleep-deprived kid who does lousy in school,” says Dr. MacDonald.

Dr. MacDonald’s second and more serious concern is the potential for kids to combine caffeinated energy drinks with the consumption of alcohol. “The FDA has been looking at this in the United States and there is a lot of concern about this.”

In fact, a 2010 FDA news release expressed concern about alcoholic beverages that contained caffeine. The FDA wrote in November 17, 2010 “that alcohol can mask the sensory cues individuals might use to determine their level of intoxication.” It went on to say “peer-reviewed studies suggest the consumption of beverages containing added caffeine and alcohol can lead to risky behaviors that could result in life-threatening or hazardous situations.”

And finally, Dr. MacDonald worries that the marketing of energy drinks leads adolescents to believe the beverages can enhance athletic performance. Health Canada does not approve of energy drinks for use by soccer players or hockey players. “Hockey and soccer coaches discourage this use of these drinks but we know kids are using the drinks with performance in mind anyway,” says Dr. MacDonald.

More ENERGY DRINK News
“I was on a bus one day in Ottawa and there were two young boys in front of me drinking energy drinks on their way to hockey practice,” she says. “One boy said, ‘the coach doesn’t want us to do this but I know it will make me play better.’”

The 2010 expert panel on energy drinks that Dr. MacDonald worked on recommended to the Canadian government at that time that Canada “desist from using the term ‘energy drinks.’” It wrote that a more accurate designation to consider might be “stimulant drug containing drinks” and that information should be clearly indicated on the packaging. The panel recommended that the beverages be dispensed by pharmacists as an over-the-counter drug.

The government reduced the amount of caffeine in the single-serve beverages to a maximum of 180 mg. However, the government declined to accept the panel recommendation and energy drinks are sold nearly anywhere beverages are sold.