Health Canada keeps on file a list of adverse reactions related to the use of caffeinated energy drinks. Its Summary of Adverse Reactions shows 87 adverse events (from 1964 to 2012), including three deaths, in which Health Canada says a caffeinated energy drink, or product, had “a suspected role” in causing some type of physical reaction, from dizziness and mental confusion to severe cardiac events. 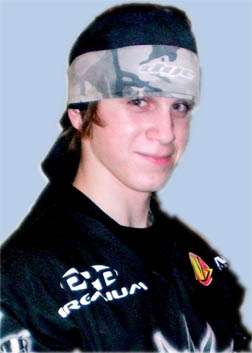 Health Canada describes 53 percent of the incidents as “serious.” Among the 87 total events, “5 were life-threatening” and “19 required hospitalization.” Among those affected, “67 percent” were male, primarily young males.

Jim Shepherd’s 15-year-old son Brian (pictured at left) is among those deaths on the Health Canada list where a caffeinated energy drink had a “suspected role.”

It’s been eight years since Brian Shepherd collapsed and died after a weekend paintball tournament in a suburb of Toronto. He’d gone without lunch, played hard and accepted an offer of a free Red Bull energy drink at the arena where some Red Bull representatives had showed up with drinks for the kids.

“At the time in Canada, caffeinated energy drinks were considered to be natural health products and technically you could not give out free samples of Red Bull, but they did,” says Shepherd.

According to medical reports, Brian Shepherd suffered a drop in blood pressure and went into severe cardiac arrhythmia. There is no evidence that Brian had a pre-existing heart problem and there is no family history of heart problems.

According to the toxicology reports at the time of Brian’s death, there was “no evidence of alcohol, poisons, or illicit drugs in his system,” nor was he dehydrated or showing signs of an electrolyte imbalance. Apart from drugs in medical procedures during his cardiac event, the only other drug in his system was caffeine.


“The only thing different that day was that he consumed a caffeinated drink,” says Shepherd.

“I have been told that it may be difficult to show one way or the other what caused Brian’s death,” says Jim Shepherd. “But I believe the energy drink contributed to his death and Health Canada’s reports say it had a suspected role.”

More ENERGY DRINK News
Since his son died on January 6, 2008, Shepherd has become a health advocate, lobbying for increased regulation of the caffeinated energy drinks. “People started coming up to me and telling me their experiences with one of these drinks and I would tell them to be sure to report it,” says Shepherd.

“Health Canada believes that adverse events of any kind are underreported and I believe that is the case with caffeinated energy drinks. The numbers are bigger than we know,” says Shepherd.