Attorney Barry Kramer of the Law Offices of Barry Kramer is representing people nationwide who have either paid, or have been billed, excessive emergency room charges. Typically, it is uninsured patients who are victims of hospital overcharging, and to compound the issue, emergency room costs are increasing. 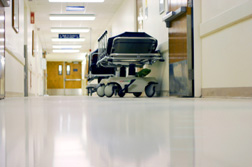 "People who are uninsured often end up leaving a major hospital's emergency room with charges that are grossly inflated and much higher than the amounts charged to insured patients for the same exact services and treatment," says Kramer, who adds that "the harsh reality of hospital overcharging for uninsured patients often falls on those who can least afford it."

LawyersandSettlements (LAS): Why did you start investigating ER overcharges?

Barry Kramer (BK): A client came to my office complaining about emergency room costs that totaled over $14,000 for a single overnight stay at a major hospital. Furthermore, it was determined that there was nothing really wrong, and after a few tests and an overnight stay for observation, my client was released from the hospital the next day.

Another person told me that a major hospital is chasing after him for $1,500. He spent only a few hours in the ER, and complains that the bill was unreasonable. Further, he found out that the urgent care clinic down the road would have provided the same services for a few hundred dollars!


LAS: How do you know if you have been overcharged for an ER treatment?

BK: A hospital's full retail charges are routinely set at unrealistically high levels, so as to allow for deep discounting, which is provided to insurance carriers, charity cases, and state and federal agencies. As a result, literally any patient charged the hospital's undiscounted rates is grossly overcharged, and ends up with bills that are three, four, or even five times the amounts paid by insurers on behalf of insured patients for the exact same treatment.

LAS: What can I do to prevent ER overcharges?

BK: The first thing you can do is avoid an emergency room whenever there is not a true emergency. Advance planning for medical issues is always a good idea. Often, an urgent care center can do a fine job for far less money. Note, however, that if you are uninsured, and nevertheless seek treatment at an emergency room of a hospital, you are likely to be charged the hospital's excessive retail rates. Second, it is a good idea to read the hospital's Admission Agreement carefully before signing it, and inquire as to the hospital's charges in advance so you know somewhat what to expect.

LAS: Why do hospitals overcharge the uninsured?

BK: The answer is twofold. The first reason is obvious. Higher charges, everything else being the same, yield higher profits. Second, because insurers demand and negotiate substantial discounts from the hospital's retail prices, hospitals simply increase their retail prices in order to allow for huge discounts from inflated prices and still maintain their profitability. Unfortunately, the occasional uninsured patient that has a home, a bank account, or other assets can get caught in the middle, and left to pay unrealistically high charges that are designed to allow for deep discounting. It is somewhat like a retail store that doubles the normal price, then offers a 50% discount. The problem, in the hospital context, is that the uninsured patient is the only one that doesn't get the discount.


LAS: What happens financially to uninsured people who cannot pay their ER bill?

BK: Sometimes a hospital bill is compromised, waived, or paid by one or more state or federal agencies. However, for the uninsured who do not qualify for any special program, the hospital billing department is often very aggressive in pursuing the collection of an outstanding balance. This can result in substantial harassment, a negative credit report, or even a lawsuit over the outstanding balance.

LAS: And uninsured people who do pay their bill?

BK: Those uninsured patients who have collectible assets, such as a home or money in the bank, often end up with no choice other than to pay all or most of the inflated charges. Sometimes an inflated hospital bill can be negotiated to a limited extent, based on the patient's ability to pay, but this is often a lengthy and frustrating process.

LAS: Do uninsured people have an option—can they choose not to pay?

BK: No. Payment is required by contract, and not a voluntary choice. The hospital typically requires some type of initial payment, as well as the signing of the hospital's Admission Agreement requiring that a patient agree to be responsible for the hospital's charges. Patients are typically sent a bill some time after the treatment is rendered. If the bill isn't paid, it ends up in the hospital's collection department.

LAS: How do hospital charges work for different classifications of patients?

BK: Hospitals charge different amounts to different entities. For example, Medicare patients pay at a certain rate, regardless of the hospital's retail charges for the services rendered. Likewise, private insurers typically pay at a discounted rate agreed in advance. Some patients may have no funds and not even a permanent address, in which case the hospital may seek reimbursement from the state as a charity case. In any case, hospitals have a sliding scale of emergency room costs, depending upon whether or not the patient is insured and by whom. Unfortunately, everybody gets a deep discount other than an uninsured patient, who can get stuck with the unrealistically high retail charges.

LAS: Do you think that ER overcharges are a common occurrence?

BK: Yes. Just the other day, I talked to a bank teller—we had never met. She asked me where I was from, and what kind of work I did. I mentioned that I am an attorney investigating ER overcharges. "I can't believe it. That just happened to me," she said. Her son had recently had an allergic reaction to a bee sting, so she raced him into ER at the local hospital. They were in ER for no more than an hour, and the ER doctor pulled the sting out. For a few minutes treatment, she got a bill for $850, which she was unwilling to pay.

That fact is that people who get stuck with an unreasonably large bill for emergency room treatment or services are invariably angry. And if they don't pay it, it usually ends up in collections where it affects their credit rating. Hospitals will pursue collection if they believe there is any recourse. As a result, uninsured patients with assets, or concerned with their credit rating, are especially vulnerable and subject to be charged outlandish amounts, which they are forced to pay.

LAS: Can someone file a claim if his or her excessive ER bill is a few years old?

More EMERGENCY ROOM OVERCHARGES News
BK: In general, if you were uninsured at the time of treatment, and had a problem with an excessive emergency room charge within the last three years, it may be possible to do something about it. It is somewhat dependent on the laws of the state where you live.

LAS: How can an attorney help someone who already paid, or is unable or unwilling to pay an excessive bill for emergency room costs?

If you have been overcharged and are being chased for the money or you have already paid for emergency room charges that were unreasonably high based on the services rendered, I may be able to seek reduction of the charges or reimbursement of the excess payments. I strictly work on a contingency basis, so I obtain my fees strictly out of any recovery obtained. There is no charge to inquire and find out what I might be able to do.

Posted by
tena san martino
on October 9, 2013
I visited an elite care er when my daughter fractured her leg. The x-ray tech was trying to straighten my daughters leg to get an x-ray and pushed down on it causing great pain. After determining that she could get the x-ray with my daughters leg in a bent position because it was taking to long for her to straighten it the x-ray showed it was a transverse fracture. The tech says"Oh no wonder you were in such pain."After this torture episode we waited for a doc to read it and brace her leg and send us on our way Texas Childrens Hosp. I do appreciate the referal. I was told that when I asked if they were under Blue Cross Blue Sheild and was told yes, meaning under contract. Turns out they are not so I was billed over 800.00 for the doctor and am about to be billed 3500.00 for use of facility. That's after my insurance paid over 2500. which I think they should settle for. The entire bill was almost ten thousand. Can I get help from an attorney if needed.
Posted by
Jim F. Speigle
on July 12, 2013
I have been slammed with ER charges in access of $7,100.00 resulting from visiting ER for nausea, dizziness, and weakness. I have file complaints with the State Attorney General's Office of the Dept. Of Health. I have received zero considerations from the hospital. I would like to know if Mr. Kramer could offer assistance? Many thanks for the website's informative report!!! Jim
Posted by
John Stull
on March 23, 2013
need information on contacting Mr. Kramer
i have a case for his review
Posted by
Wayne Kern
on December 1, 2012
This so very true concerning theses overcharges as explain by Mr Kramer.He is currently representing me in a class action due to these overcharges.He is also very compassionate and concerned about these matter.I highly recommend him in these types of cases.He has gone out of his way to help me understand these matters.
Posted by
Joseph
on February 11, 2012
There is no contact information for Mr. Kramer. How can we contact him?