ER Overcharges for Services Not Rendered

Countless people have had to pay emergency room overcharges for the bare minimum of treatment. Perhaps they saw a doctor for a few minutes and left with a prescription and a bill for thousands of dollars. The following people didn’t even make it past the waiting room, but they were billed emergency room charges. 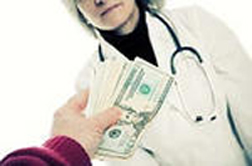 Mr. Ibrahim took his 18-month-old son to the ER with a fever of 103° on the advice of the receptionist at his doctor’s office. (Just before he arrived at the office his doctor had been called to a family emergency.) His son also had a history of upper respiratory infection so there was a great cause for concern.

“After waiting for over an hour they still hadn’t called our name and I was afraid his temperature was going up,” says Mr. Ibrahim. “I asked someone at the front desk if a doctor could possibly see my son but she told me we had to wait because four people were in front of us.”

Mr. Ibrahim says these four people were in the waiting room when they arrived and none of them had been called. After waiting another hour he realized that his son was in danger - his fever could go up and they had to wait an exorbitant amount of time. He had no choice but to leave.

“I told the front desk that ‘I don't need your services,’ and walked out,” Mr. Ibrahim explains. “I couldn’t believe that they would bill me for doing nothing. They billed my insurance company $231.00 and sent me a bill for $92.00. This doesn't seem like a normal way of doing business. If they haven't provided any service, then what is this bill for?”

While Mr. Ibrahim was in the ER waiting room, he called his wife, a registered nurse, who was working at the time. “I could hear my son crying in the background,” she says. “I got there as fast as I could and met my husband in the lobby; he was so angry.” They decided to go to the pediatric clinic, about five miles away. And the four people were still waiting when they left.

“The doctor at the clinic saw our son immediately,” says Mrs. Ibrahim. They checked his vitals and he had a throat swab. The doctor determined that our son had an infection and gave us a prescription for antibiotics. And they gave us a bill for $12.”

More EMERGENCY ROOM CHARGES News
Audrey, from San Diego, says she went to the ER only because she was unable to see her doctor or get into the “After Hours Clinic” on Sunday night. “I signed in at the desk and asked how long I would have to wait,” Audrey says. “The receptionist told me she had no idea but there were several people in front of me who had already waited a few hours. I was in a lot of pain so I called another clinic - luckily they could see me right away. I went back to the check-in desk and told them I was leaving.”

Audrey says she didn’t see a nurse or a doctor and she was in the waiting room less than 10 minutes. Yet a claim was filed with her insurance company and she was billed $405.53! “I called the hospital and was told that charges begin in the waiting room when you check in even though I hadn’t received any treatment. I didn’t even get my vitals checked. I believe these emergency room costs amount to fraud.”

If you have emergency room bills that you believe show evidence of hospital overcharging, Attorney Barry Kramer says you have every right to dispute medical bills.

Posted by
fedup
on September 19, 2014
I had a similar situation with FLORIDA HOSPITAL!
Dare not I get sick & have to go back.

My leg was numb & I was unable to walk. This mysterious condition went on for many days & finally I decided I better go to ER, thinking it may be serious...like a stroke?

Doctor put an ace bandage on my leg & told me to go home & elevate it. Never explained why I was experiencing complete numbness.

I received a bill for $500! ( my insurance deductible for this!) What attorney will handle a small claim like this...if they can't make a million dollars they are not interested!

....so I paid this ridiculous bill... if I didn't they would destroy my credit.
After the bill was paid in full they put it into collections!
Medical fraud...this is the reason our healthcare is in shambles today. Such a travesty!

Posted by
Frankie J. Parks Sr.
on February 2, 2014
Yes I would like some info on this suit. The hospital my ex-wife had 11,000 dollar bill for a few visits and now they are garnishing my wages for this billing overage. She spent very little time in ER of West Jefferson Hospital was charged over 8,000 in billing for simple stomach problems. That she had while on workmen's comp for back problems they gave her meds that messed with her stomach all the time . would like to know what I can do to get this to go away.
Thanks
Posted by
BC
on February 2, 2014
Emergency room fees have always been a rip off. Once you register and if you see a doctor be prepared to pay thousands of dollars even if the doctor just walks in and out of your room and does nothing and you have a short stay and nothing is done for you. Hospitals are where the REAL healthcare rip offs are taking place. Obama and his government have done nothing to stop the fraud in hospitals, pharmaceutical companies or medical equipment manufacturers. They talk about corporate greed but no one mentions that hospital CEO'S make multi millions every year and Hospital administrators make 100s of thousands per year and every large hospital has many of these high paid executives that do nothing but increase the cost of a hospital stay. I know because I work in a hospital and what the public doesn't realize is who is really stealing their money and robbing the insurance companies.
Posted by
Simply Wow
on January 28, 2014
I hope this is not Florida hospital hahahha, priest is hired for nothing, name of God is called on empty! I hope someone will not call this an hate of Adventists! I bet this is Florida hospital specially because it says Kissimmee, FL. It's easy know who/which hospital you are dealing with, Florida hospital was cheating/scamming tax payers money in 12 different hospitals by recruiting people to use med care, their recruiting agents even called me, sorry I pay for my own health insurance thanks was my answer. (Based on the audit, which covered 2008 to 2011, Florida Hospital has sent back "about $2.8 million," which represents less than "four one-hundredths of one percent" of the total funds collected by Florida Hospital, O'Lenick said, Last month a federal judge denied the hospital's request to dismiss the second complaint. The suits allege that the seven hospitals submitted fraudulent claims to Medicare and Medicaid by charging for services never performed and overcharging for many that were.)

If you want to know who Adventist health system really is please follow the link below and read all of it. http://articles.orlandosentinel.com/2012-08-08/health/os-whistleblower-lawsuit-florida-hospital-20120808_1_adventist-health-suit-claims-whistleblower-lawsuit You will hate them, you will say of course they are evil.