Robert’s hip replacement has served him well for many years, even though the metal-on-metal device was recalled by DePuy. Just recently, however, his cobalt levels have skyrocketed. “My husband is having cognitive issues, which seems to indicate cobalt poisoning,” says Trudy. “In January, DePuy said they would pay for surgery to have it removed but now they won’t cover it because my husband had the surgery in India. DePuy sells its devices worldwide, so what difference does it make?” 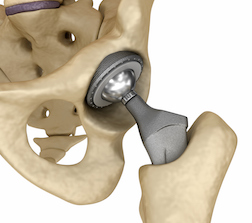 Robert went to Hyderabad, India for Depuy’s ASR hip resurfacing system because it wasn’t available in the U.S. (The FDA approved the metal-on-metal device about one year later). “His cricket friends in England, including a medical doctor, were getting their DePuy hip resurfacing done in India and they were up and walking one day after surgery,” says Trudy (not her real name). “The orthopedic surgeons came highly recommended and the surgery was considerably less expensive.”

(Thousands of U.S. patients have opted to have hip replacement surgery in Hyderabad, which has seen a whopping 166 percent increase in medical tourism since 2014. The city is home to western-trained orthopedic surgeons specializing in hip and knee replacements. When Robert and Trudy went in 2004, India had already received 150,000 medical tourists.)

DePuy marketed its ASR hip resurfacing system for people like Robert: athletic and younger than the typical hip replacement recipient. Robert was in his early 50s but had an arthritic hip chalked up to playing rugby and cricket. “When this device was recalled our insurance company—Kaiser-- wanted to look at it and x-rays showed it was fine,” Trudy says. “But Robert started to have problems getting in and out of the car so he saw an orthopedist here. He had an MRI and the orthopedist put a syringe into Robert’s hip to see if there was any debris, which came out clean. He advised Robert to see a physical therapist but what good would that do?”


”Most alarming is that people are diagnosed with Alzheimer's when in fact a PET Scan reveals that they have extremely high levels of cobalt caused by metal-on-metal hip replacements.”
Kaiser required Robert to get regular blood tests since the device was recalled seven years ago. And he is not alone. As of June 2017, the National Health Service in the U.K requires 8,600 people who still have this device to have x-rays and blood tests yearly. “All the time we were told that his cobalt levels were within normal range, until this past April,” Trudy adds. “He was running a low-grade fever and I noticed that he was very confused, and he puts together words that don’t make sense, like he has Alzheimer's disease. I called Johnson & Johnson to follow up on their letter—which we kept—that said they would cover revision surgery. But I was told that they don’t offer this anymore, even though the letter was sent this year…”

Trudy researched metal-on-metal hip replacements and cobalt levels. She came across Dr. Tower talking about his own hip replacement failure. “Before the revision operation, the cobalt concentration in my blood was found to be 120 times that which is thought to be safe for cobalt-exposed workers and my cerebrospinal fluid (CSF) cobalt level became the third highest reported in the literature,” Tower says on his website.

“Dr. Tower talks about his patients in Alaska who needed revision surgery because they have cobalt poisoning,” says Trudy. “Most alarming is that people are diagnosed with Alzheimer's when in fact a PET Scan reveals that they have extremely high levels of cobalt caused by metal-on-metal hip replacements.”

More DEFECTIVE HIP IMPLANT News
DePuy was ordered to pay more than $1 billion in damages to hip replacement patients who were injured by their devices after nearly 100,000 of its devices were recalled. Unfortunately for people like Robert, revision surgeries are typically less successful than the initial replacement operation, result in longer hospital stays and the cost is generally borne by patients and by their insurance companies.

But at what cost are neurological problems? Robert’s orthopedist told Trudy that only a small percentage of surgeons know how to perform revision surgery and he isn’t one of them. Robert is seeing another orthopedist this week and Trudy is hopeful that revision surgery will reverse his cognitive problems. And she is hopeful that an attorney will get another answer from Johnson & Johnson.

Posted by
Darren Eastman
on January 8, 2019
My late father got a hip replacement from Kaiser approrixamtely 20 years ago and died 5 years ago. He suffered from a rapid onset of cogntive decline not normally seen in mentally active patiients.

My father started drinking and smoking heavily from his decline and was was blamed on his cognitive woes. I can get his medical records from Kaiser to identify the date of surgery if you feel it could be a valid claim.

He'd fall uncontrollably and was constantly hospitalized for such injuries. Cobalt poisoning makes sense because of all the nausea and discomfort he experienced when he was sober.

He fell and broke his pelvis and Kaiser tried to disharge him without treatment. I appealed and won. While hospitalized he started hallucinating; this continued until his death. He wasn't experiencing Rx side-efects ad\nd had never had such issues. I suspected brain cancer, which he didn't have.