Red light cameras have been a major source of revenue for cities across the Washington state since they were first introduced four years ago. Drivers who zip through red lights at camera equipped intersections have routinely paid $124 for their infraction, yielding cities like Seattle more than a million dollars a year in fines. 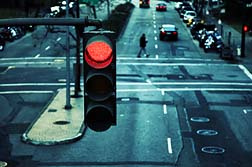 But eagle-eye attorneys recently spotted a problem. Seems that those fines are about twice what they should be according to Rob Williamson from the firm of Williams and Williamson in Bainbridge, Washington. "My co-counsel's nephew recently got a ticket," says Williamson. "When she looked at the statute she noticed that that it clearly limits the fine to the amount of other tickets in the municipality – most of which are in the $20 to $40 range."

Williamson's firm has recently filed a class action suit against 19 cities in Washington State where the red-light cameras have been snapping pictures of drivers and sending out big tickets. The suit has yet to be certified, but a successful litigation could mean the size of the fines will be trimmed substantially and hundreds of thousands of drivers would be refunded the difference.

In reaction to the suit, the cities claim that since there are at least two parking penalties over $200 on the books, one for parking in a handicapped zone and one for abandoning a vehicle, the $124 red-light tickets are well within the cost of municipal parking ticket fines.

More Consumer Fraud News
A win in the red-light traffic camera litigation could turn a cash cow into a significant loss for the 19 cities involved.

The Princeton Harvard-educated lawyer's quiet and unassuming manner belies his substantial experience as a trial lawyer. After a career as a Los Angeles entertainment lawyer, Williamson went to Seattle and has done a substantial amount of work representing people injured in maritime and railway accidents.

Rob Williamson established his firm with attorney Kim Williams in 1998. They
represent injured people in auto accidents andmedical negligence as well as people injured while working on tankers, freighters, fishing vessels, construction sites and other on the job injuries. The firm has recently handled cases for users of the drug Vioxx.

Posted by
Beverly Boykin
on July 29, 2011
I would like to add to consideration for the class action, so-called speed cameras. Whether these cameras are calibrated go beyond an accused person's ability to challenge as the people you have to get this info from are people in charge of these cameras who are slippery because they are married to the idea of these cameras and they don't want to reveal where their agency may have slipped on the job. The deck is stacked against the poor hapless driver caught in the cross-hairs of these hair-trigger cameras set to generate money - a city slot machine of sorts racking up cha-ching for the city.