Unfortunately, many of these calls are from people who have hit rock bottom and face the worst-case scenario: liquidation. Individuals often sink into deep depression, believing they can't dig themselves out of financial ruin. Through inaction they often lose the opportunity to find a solution. However, a bankruptcy lawyer can help restructure and reorganize a client's debt, often by way of settlement plans or Chapter 13 bankruptcy (explained below). 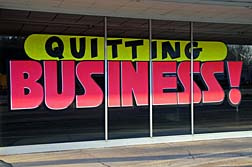 Bankruptcy attorney Charles Leftwich, of Clark Law Offices in Arizona provides an avenue for his clients to afford themselves of their constitutional rights. "In America, this is the land of the second chance; I help them to get a fresh start," he says.

Leftwich has seen an increase of bankruptcy cases due to subprime loans. "Greedy mortgage people are bringing it on," opines Leftwich. "My clients in Arizona want to keep their homes; they want to make payments so they can pay on their mortgage even though the property values are anywhere from $50K to $100K less than they were a year ago." He says that, even though a client would have negative equity on their house, they would prefer to keep their mortgages, but for their high mortgage interest rate. "The mortgage company could service them but it is not willing to reduce their interest rate, thereby contributing to debtor risk and foreclosure."

Leftwich likens credit card debt to the carrot and the stick analogy: "We can cut deals and negotiate but unless the debtor (my client) has the ability to make a lump sum payment, it has been our experience that the credit card company won't work with you. When we do debt negotiations, we offer a lump sum payment, typically 33-50 percent settlement on the debt. The creditors are more willing to work with attorneys because we can always file bankruptcy for our clients and then they won't get any money, (bankruptcy being the stick).

There are several different chapters of bankruptcy. Chapter 12 is for fishers and farmers; chapter 11 is for businesses such as convenience stores, auto makers and airlines; then chapter 13 and 7 is for the consumer, and deals primarily with credit card debt.
(Chapter 7 is the liquidation portion of the bankruptcy code.)

Chapter 13 means that you intend to repay the debt you owe, by structuring a legal debt workout that will be reviewed, approved, and overseen by a bankruptcy court. It also enables individuals and business owners immediate relief from collections and additional late payment penalties and interest. Chapter 13 bankruptcy can help you substantially reduce your monthly payments for secured and unsecured debt. Repayment plans to creditors can be proposed over 3-5 year periods and during this time, the law forbids creditors from starting or continuing collection efforts.

Chapter 7 bankruptcy is designed to give the debtor a "fresh start" but it can also result in the loss of property. Unlike Chapter 13, it does not involve filing a repayment plan. Instead, the bankruptcy trustee gathers and sells the debtor's nonexempt assets and uses the proceeds of such assets to pay holders of claims (creditors) in accordance with the provisions of the Bankruptcy Code. Part of the debtor's property may be subject to liens and mortgages that pledge the property to other creditors. In addition, the Bankruptcy Code will allow the debtor to keep certain "exempt" property; but a trustee will liquidate the debtor's remaining assets.

In a nutshell, Leftwich explains the process of Chapter 13. "The attorney prepares a plan and submits to the court for approval. The trustee, who represents the creditors, will make recommendations and evaluate the plan to see if it is feasible and viable. Next, the judge will approve the plan of payment, typically between 36-60 months long and the creditors get paid back--depending on their status--a certain percentage.

Why go to a lawyer instead of visiting a credit counseling agency or working with the creditors themselves? Leftwich says that creditors are reluctant to work with you because they don't want you to negotiate a better interest rate. Instead, they want to force you into filing bankruptcy. But as soon as you retain an attorney, they will start to make offers. "Without an attorney, some creditors have programs for the asking and don't want to deal with you if you are current on your bills: they want you to be a few months late on your accounts such as your mortgage, (foreclosure is a three- month process) so they know that you are not just trying to negotiate a better interest rate.

"But this is also a catch 22. The US president has a new plan that addresses the issue of high interest rates: you don't qualify if you are a month late. On the one hand, they won't work with you if your payments are timely; on the other hand, if you are 30 days late just on one payment, you don't qualify on this new plan."

More News
Confusing? You bet, and it gets more so. To qualify, Leftwich advises not to rely on the new law [of 2005]. For example, while it is true that the new bankruptcy laws of 2005 affected some people, the large majority of families that qualified for Chapter 7 bankruptcy prior to the new laws, can still qualify.

Contrary to what credit card companies want people to believe, in Chapter 7 bankruptcy laws, the filer may "reaffirm" certain secured debt, such as a mortgage and automobile loan. This means that you can eliminate all revolving credit card debt and keep your home and car by agreeing to continue to repay the loan.

There are a lot of conditions and it gets complicated. You might want to seek legal help.

Click to learn more about LawyersandSettlements.com
LawyersandSettlements.com - A trusted, independent legal news provider bringing quality news and information on all legal cases and lawsuits filed in United States of America to its readers since 2002. Over 250,000 legal help requests including Bankruptcy Cases have been forwarded to lawyers all across to the country.