To TD Ameritrade: "I Want My Money!"

Class action lawsuits against Ameritrade TD over their auction rate securities are flying everywhere right now because investors are not able to get their money out of their accounts. 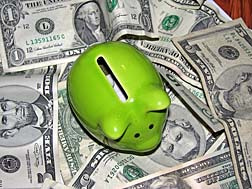 Basically, what an auction-rate security is, is a long-term bond that is traded in weekly auctions. They have been hailed by brokerages for quite some time as being just as liquid and safe as money market accounts. The difference is that they pay more.

Cohen was so excited about this news that he brought in another $25,000 for a total investment of $100,000 of his firm's money, but when he called the bond desk he was told the he couldn't get in. The employee he spoke to also told him that he also didn't think that he could get out either. Cohen, confused by this news, didn't understand what the employee meant when he said that Cohen wouldn't be able to get out. That is when the employee clarified by saying that there were no more auctions because the auctions failed.

More News
Nevertheless, Cohen is not alone because there's approximately $300 billion dollars frozen in auction-rate securities because no one is showing up at the auctions. So now there are lawsuits against Merrill Lynch, Morgan Stanley, and TD Ameritrade.

One of the most recent TD Ameritrade lawsuits was filed by Sheldon Silverstein who is also seeking class-action status for the lawsuit because he knows that he is not the only one who was allegedly told by TD Ameritrade that auction-rate securities were just as safe as cash. Now he and all of these people are stuck with securities that they cannot sell.

The damages that are being sought by Silverstein are not specified. He wants whatever relief that he receives to cover any damages and losses, as well as any other relief that the court finds appropriate.

Posted by
Terry Adams
on November 19, 2012
Performed a huge trade on tdameritrade website. It was intended to be buy transaction. However, tdameritrade executed the transaction as a sell to cover without notice and without my having selected this as the type of transaction. There error cost me thousands of dollars. They admit the error but are blaming their software and refusing to take on any liability for their actions.