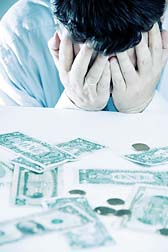 According to the 1/14/10 edition of the Wall Street Journal, Deutsche Bank AG has agreed to buy back approximately $7.8 million in auction rate securities from investors in North Carolina—including individuals, nonprofits, and businesses—with assets of $10 million or less.

Investigators found that Deutsche Bank did not supervise investment salesmen and improperly sold the auction rate securities to investors as highly liquid. Deutsche Bank will have to pay $92,000 for the cost of the investigation.

Companies that face or have faced lawsuits regarding auction rate securities are alleged to have known that the market for the securities was failing but continued to sell them as safe and highly liquid.

At the time the auction rate securities market collapsed, its estimated worth was $330 billion, according to The New York Times on 3/09/08. It has been almost two years since the market failed and there are still investors fighting to get their money back from financial firms that misled them about the nature of the securities.

If you have suffered losses in this case, please send your complaint to a lawyer who will review your possible [ARS Lawsuit] at no cost or obligation.
Request Legal Help Now