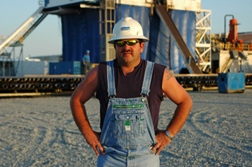 Q: (LawyersandSettlements) What is Asbestos Drilling Mud and who is at risk of asbestos exposure?

A: (Ben Stewart) Drilling mud was widely used in the oil industry to help cool the drill bit and flush debris from the well hole during drilling. My understanding is that asbestos was first used as an additive way back in the late 1950s, but there could be situations prior to that and up until the late 1980s.

Asbestos drilling mud additives were widely used throughout the US, as well as off-shore rigs. Asbestos was used because of its superior heat-resistant and bonding qualities. Pure asbestos fibers typically came in 50-pound bags and when the fibers were added to the drilling mud, they could easily become airborne.

Those at risk are oilfield workers, both onshore and offshore, such as derrickmen, mudmen, roughnecks, roustabouts, and just about anyone who often worked with drilling muds and various drilling mud additives that were used in the mud circulation system.

And their families could be at risk. Prior to the 1970s, more often than not oilfield workers were not given safety equipment or special clothing; they would wear their clothing home, covered in asbestos fibers, and then have the clothing washed by their spouses, circulating the fibers even more.

Q: (LAS) What should someone do if they have symptoms or even suspect asbestos exposure?

A: (Ben Stewart) First, see your physician and make sure you get the appropriate testing—an asbestos screening lung x-ray. Then seek help from an experienced lawyer.

Q: (LAS) What are the symptoms of asbestos drilling mud exposure that qualify a claim?

A: (Ben Stewart) You don't have to be diagnosed with mesothelioma (which is only caused by asbestos inhalation) or asbestosis to file a claim. A number of other cancers have been linked with exposure to asbestos. Each case has to be diagnosed on an individual basis and viewed by an attorney who has to rule out any other causes for the medical condition in question.

Q: (LAS) What information do you need from me to submit an asbestos drilling mud claim?

A: (Ben Stewart) I need to know when and where you worked that is related to asbestos drilling mud exposure. And I need documentation of your current health condition. Keep in mind that you don't have a claim until you have a diagnosed disease.

Q: (LAS) Is there a statute of limitations?

A: (Ben Stewart) Yes; the clock starts ticking after you know that you have an injury due to asbestos exposure.

Q: (LAS) Does it matter where I live when I find a lawyer to represent me?

Q: (LAS) My employer claimed bankruptcy. Do I have any recourse?

A: (Ben Stewart) Yes. Your employer is not liable exclusively to asbestos. It could be assigned to the manufacturer of the product you were using. Even if the manufacturer has gone bankrupt, there are a number of restitution funds established by the bankruptcy court and you can make claims into these funds.

Q: (LAS) I heard that the Jones Act can help my claim.

A: (Ben Stewart) The Jones Act, a maritime law, is not directly related to the drilling mud litigation. You may bring your claim under it but it is not mandatory. Besides, a larger percentage of asbestos mud drilling happened outside the waterways on platforms; about 80 percent of oilfields are on dry land, in states such as Kansas and Wyoming. You'll find an oilfield any place where there is a well, natural gas, and where a shaft has been drilled, where you are drilling through rock.

A: (Ben Stewart) There are about seven manufacturers of the asbestos drilling mud that we know of so far. And possibly more products will be involved, following our investigations.

Q: (LAS) Is the government taking any action against asbestos mud manufacturers?

A: (Ben Stewart) I'm not aware of any direct action concerning these asbestos products by the government—so far.

Q: (LAS) How much will it cost for legal representation?

More ASBESTOS DRILLING MUD News
A: (Ben Stewart) Legal representation is being done on a contingency basis; therefore there is no cost to the claimant unless a recovery is made.

Q: (LAS) Have any cases settled, and if so, what is the verdict?

A: (Ben Stewart) To my knowledge, there is one case in trial. We are currently involved in litigation in Louisiana and it has not yet gone to verdict. We are presently evaluating and going forward with asbestos drilling mud claims nationwide.


Attorney Ben Stewart is an experienced prosecutor, municipal magistrate and civil trial lawyer dedicated to handling cases of people harmed by professional negligence. In addition to a full research and associate staff, Stewart contracts other professionals, from virtually every field of specialized law, including asbestos drilling mud expert witnesses.

Click to learn more about LawyersandSettlements.com
LawyersandSettlements.com is an online news and information site for the general public and legal community. As a legal news resource, we have emerged as an independent & trusted voice. We provide detailed and quality information on various lawsuits filed including Personal Injury Cases, Drugs & Medical Cases, and Environment Cases.