Study: More Than 10,000 Americans Killed by Asbestos Every Year

An analysis from the Environmental Working Group (EWG) Action Fund suggests that as many as 15,000 Americans die every year due to asbestos exposure. Workers exposed to asbestos through drilling mud, construction materials and a host of other products are at an increased risk of asbestosis, mesothelioma and lung cancer. 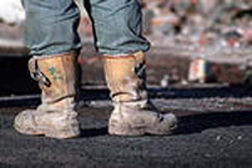 More ASBESTOS DRILLING MUD News
Lung cancer, which was estimated using a formula developed by researchers of the International Agency for Research on Cancer, was linked to between 127,579 and 159,480 deaths in total, or between 9,113 to 11,391 deaths per year.

Previous estimates of asbestos-related deaths put the annual figure at between 2,000 and 5,000 fewer each year.

“Clearly, asbestos kills more Americans each year than we thought,” said Sonya Lunder, a senior research analyst with the EWG and EWG Action Fund in a news release.
“The fact that it is still legal and used in the U.S. is an outrage.”

Lawsuits have been filed against various companies and employers alleging workers, their loved ones and consumers have been exposed to asbestos and not properly warned about the risks.