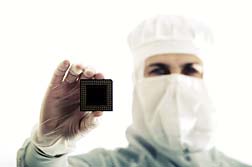 There has long been discord between Intel, the largest and most powerful chip manufacturer in the world with an 80 percent share of the marketplace, and rival AMD, which has been trying to increase its stake in the computer chip market.

AMD was scoring some successes earlier in the decade with a series of computer chips that were heralded as faster and superior to that of Intel, which allowed AMD to crack the lucrative computer server market for the first time.

It took years for Intel to catch up with a product that eventually equaled and in some cases exceeded that of AMD. In the meantime, however, Intel was accused of attempting to stifle the growth of its rival by making payments to computer hardware manufacturers as an incentive to keep using Intel chips rather than take their business elsewhere.

As part of the $1.25 billion settlement, announced moments ago, Intel has agreed to abide by a set of "business practice provisions," according to a November 12th report by the Associated Press.

More ANTITRUST News
In return, AMD promises to drop its litigation actions in the US as well as Japan, together with the withdrawal of complaints to antitrust regulators worldwide.

The two rivals issued a joint statement this morning as the settlement was announced.

"While the relationship between the two companies has been difficult in the past, this agreement ends the legal disputes and enables the companies to focus all of our efforts on product innovation and development."

Last Wednesday Andrew Cuomo, the Attorney General for New York, launched an antitrust lawsuit against Intel alleging unfair marketing and business practices in an effort to shut out rival AMD from the marketplace.

It is not known if the lawsuit will continue in view of the settlement announced this morning.