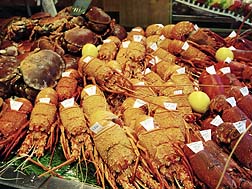 The investigation, which is expected to last several months, stems from a formal written complaint sent to the Attorney General's office from a collection of more than 50 lobstermen residing in Washington County.

Local fishermen charge that dealers are colluding to set low dockside prices in an effort to control the market and drive their own profits. According to the Associated Press (AP), dealers regularly discuss the amount that they pay for freshly caught lobster with the current going price of $3 a pound. The same lobsters can retail for anywhere between $8 and $25 a pound.

"The office has just begun to investigate and has not made any conclusion or determinations that anything illegal is happening," Kate Simmons, a spokeswoman for the Attorney General's office, tells the AP.